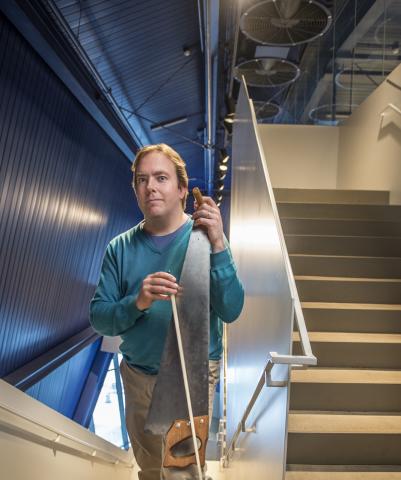 “This is a composer to watch; he might just shake things up with a musical trainwreck.” -New Music Connoisseur

Mr. Auerbach-Brown received his first composition award in college, when he won the New York State Federation of Music Clubs’ Composition Competition with his first piece, a two-movement work for french horn and piano. He was awarded an ASCAP Young Composers’ Award in 1996 for his Trio for Violin, Cello and Piano; later that year he attended June in Buffalo, an intensive one-week seminar for composers and performers of contemporary music. The Trio received its New York premiere in September of 1999 in Weill Recital Hall, on the Vector 5 contemporary music series. His String Quartet was also premiered by the Cavani Quartet at Weill Hall in December of 1997. In 1998 Mr. Auerbach-Brown was the recipient of a Charles Ives Scholarship given by the American Academy of Arts and Letters to “composition students of great promise.”

Mr. Auerbach-Brown has been commissioned by such notable institutions and performers as the Cleveland Institute of Art, percussionist Donald Miller of the Cleveland Orchestra, the Finger Lakes Music Educators' Association, Parade the Circle, the Music Settlement, the No Exit ensemble, and the Cleveland Boy Choir. Musicians and ensembles who have performed his music include the Playground Ensemble (Denver, CO), guitarist Jason Vieaux (Cleveland, OH), the Sirius String Quartet (New York, NY), saxophonist Andy Carpenter (Chicago, IL), clarinetist Laura Sabo (Cincinnati, OH) clarinetist Amy Advocat (New York, NY) and flautist Carrie Rose (Washington, D.C.). His arrangements of Hasu Patel's works for sitar and orchestra were performed by the Doctors' Orchestra of Houston (Texas), and by the Plymouth Canton Symphony (Michigan).

Additionally, Mr. Auerbach-Brown is active as a sound artist, curator, performer and music educator. His installation Boundaries was presented at SPACES Gallery in November 2011, and he curated a sound art exhibition titled Apopheny-Epiphany at SPACES in May 2014. He teaches music theory and composition at The Music Settlement and is an adjunct instructor at Lakeland Community College and the Cleveland Institute of Art. His classes at CIA focus on the connections between contemporary music and sound art with the visual arts, and he leads courses in electronic music at LCC. He plays alto saxophone, musical saw, melodica, and throat sings in the chamber collective The Trepanning Trio.

Mr. Auerbach-Brown is a member of the Cleveland Composers’ Guild and is published by the American Composers’ Alliance. He lives in Cleveland, Ohio with his wife, son, daughter and cat who acts like a guard dog.