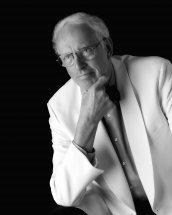 A native of Winnipeg, Manitoba, Sydney Hodkinson (1934-2021) received his Bachelor of Music and Master of Music Degrees from the Eastman School of Music where he studied composition with Louis Mennini and Bernard Rogers. He continued his studies in composition at the Princeton Seminars with Elliott Carter, Roger Sessions, and Milton Babbitt. Hodkinson received his Doctor of Musical Arts Degree from the University of Michigan in 1968, studying with Leslie Bassett, Niccolo Castiglioni, Ross Lee Finney and George B. Wilson.

Dr. Hodkinson taught at the Universities of Virginia, Ohio and Michigan and  served two years as artist-in-residence in Minneapolis under a grant from the Ford Foundation Contemporary Music Project. He joined the faculty of the Eastman School of Music in 1973 assuming direction of the Eastman Musica Nova, a virtuoso new music ensemble described by the Cleveland Plain Dealer as "a student ensemble of professional quality." During the academic years 1984-86, Hodkinson served as Meadows Distinguished Visiting Professor of Composition at Southern Methodist University.

In addition to his activities as conductor, Mr. Hodkinson was one of the most prolific and widely performed contemporary composers. His opera "SAINT CARMENT OF THE MAIN", a commission from the Banff Centre for the Arts and the world premiere by the Guelph Spring Festival May 19-24, 1988, BUMBERBOOM, Commissioned and premiered by the Montreal Symphony, D.R. Davies conducting, EDGE OF THE OLDE ONE for the New York Philharmonic Orchestra, premiered with Pierre Boulez conducting, CHANSONS DE JADIS - six songs of loneliness for soprano and orchestra, premiered by the National Arts Centre Orchestra of Ottawa, Mario Bernardi conducting with Gwenlynn Little as soloist.