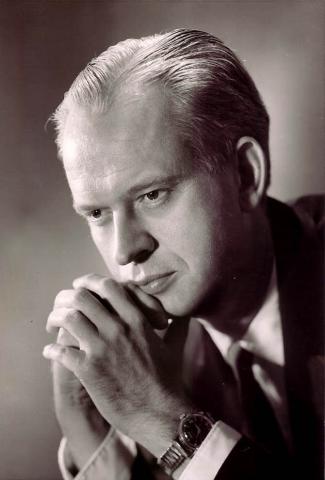 Robert Kelly was born September 26, 1916, at Clarksburg, WV. He studied violin at an early age and later majored in violin at the Juilliard School of Music under Samuel Gardner. He studied composition with Rosario Scalero at The Curtis Institute of Music where he received his Bachelor of Music Degree in Composition. Much later he continued studies with Herbert Elwell at the Eastman School of Music where he received his Master of Music Degree in Composition.

From 1946-76 he was Professor of Composition and Theory at the University of Illinois School of Music, Urbana, Illinois. Many of his compositions were composed and performed in this period. Notable ones were: MINIATURE SYMPHONY (Symphony No. 1) premiered by the Austin Symphony, Ezra Rachlin, conductor, and later with Rafael Kubelik conducting this MINIATURE SYMPHONY on one of the University of Illinois Contemporary Arts Festivals. Later there was a memorable performance of the MINIATURE SYMPHONY by the Cleveland Orchestra, George Szell conducting. Kelly's SYMPHONY NO. 2 was premiered in Tokyo, Japan by the Japan Philharmonic Orchestra, Akeo Watanabe conducting. The EMANCIPATION SYMPHONY (Symphony No. 3) was premiered in Washington DC by the National Symphony in 1963, the 100th Anniversary Year of the Emancipation Proclamation. WALDEN POND, an Environmental Cantata for Mixed Choir, Percussion Ensemble, Flute, Soprano, and Narrator was premiered by the University of Illinois Concert Choir and Percussion Ensemble conducted by Harold Decker.

1) Kelly was appointed Associate Member of the University of Illinois Center for Advanced Study in 1963-65 with a grant to compose an opera, THE WHITE GODS, The Aztec Viewpoint of the Conquest of Mexico; 2) guest composer of the New York City Composers Forum in 1957 with the Walden String Quartet of the University of Illinois performing STRING QUARTET NO. 2, and Robert Swenson, cello, and Stanley Fletcher, piano performing SONATA No. 1 for Cello and Piano. 3) commissions by the University of Illinois were SYMPHONY NO. 2, and EMANCIPATION SYMPHONY; 4) National Endowment for the Arts commissions were - CONCERTO FOR VIOLIN AND ORCHESTRA, and CONCERTO FOR VIOLA AND ORCHESTRA.

SYMPHONY NO. 2, Japan Philharmonic, Akeo Watanabe conductor, by Composers Recordings, Inc. "Sunset Reflections" from ADIRONDACK SUITE, OP.1 with Leopold Stokowski and the NBC Symphony by RCA recordings (recently released on CD). SONATA FOR OBOE AND HARP, by Joseph Robinson, principal oboe of the New York Philharmonic, and Deborah Hoffman, harp, on CRS8424. Soon to be released - SONATA FOR OBOE AND HARP on a CD with James Gorton, principal oboe, and Gretchen Van Hoesen, principal harp, both of the Pittsburgh Symphony.

Publishers of Kelly's music are: American Composers Edition, Inc. NYC, and E.C. Schirmer of Boston. Professor Kelly retired from the University of Illinois in 1976; he has been a member of Broadcast Music, Inc. NYC, since the mid 50s.