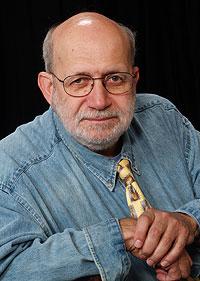 Arthur V. Kreiger (1945-2023) composed for many decades. Performed worldwide, his catalog of works contains pieces for orchestra, chorus, mixed chamber ensembles, solo instruments and the electronic medium. The world premiere of his work, "Never Again the Same," was performed at a "Works and Process at the Guggenheim" presentation at the Solomon R. Guggenheim Museum in New York City on Nov. 5 and 6, 2006.  His compositions are recorded on Odyssey, Spectrum, Finnadar, CRI, Neuma, Context and New World Records.

Kreiger's professional honors included the Rome Prize, a Guggenheim Fellowship, as well as commissions from the Fromm and Koussevitzky Foundations and the National Endowment for the Arts. He served as composer in residence at William Paterson University, The North Carolina School of the Arts and at The Composers Conference at Wellesley.

The composer was the recipient of the 1993 Brandeis University Creative Arts Medal. A portion of the text of this award citing his electronic music follows. "Although much of his music can be heard only as it issues, in whole or in part, from loudspeakers, its creative shaping source is immediately unmistakable, recognized as human and intensely personal. It is not music shaped by technological means, but music that demands technology for its fulfillment. While the music is so singularly Kreiger's, it is assuredly of its time, not only or even primarily because of the composer's mastery of sophisticated musical technology, but in the compositional modes that the music so urgently expresses. For it is learned music, in that it is aware and informed in its craft. . ."

Prior to joining the Connecticut College faculty, Kreiger held teaching positions at Harvard, New York University, Baruch College, Rutgers and Columbia. He served as a technician and instructor at the Columbia/Princeton Electronic Music Center for over 15 years. A popular teacher at Connecticut College, student evaluations have consistently praised Kreiger's courses. The composer is particularly happy to be associated with the Cummings Electronic and Digital Sound Studio at the College. He served on the committee for Arts and Technology.

Kreiger's album "Meeting Places," features highly acclaimed performances by the New York New Music Ensemble and the Juilliard Percussion Quartet. Each work in the collection contains an electronic component that was realized at the Columbia/Princeton Electronic Music Center in New York City. The album was released on Albany Records through the generous financial support of the Mary Flagler Cary Charitable Trust and the Aaron Copland Fund for Music. Kreiger and his wife Diane have lived for many years on Moosup Pond.