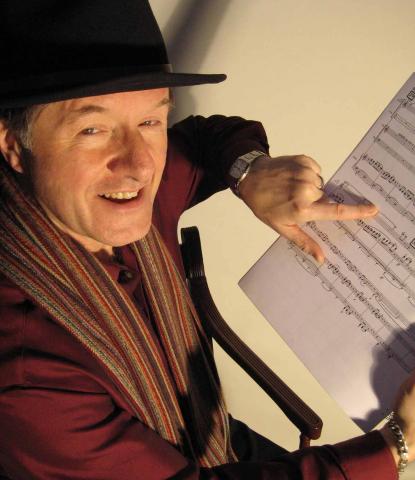 Born in New York City, composer Ray Luedeke attended the Eastman School of Music, the Vienna Academy of Music, Northwestern University, and Dartmouth College, where he studied with George Crumb. His output is extensive and varied. It runs the gamut from entertaining theater pieces for children, through a long list of sophisticated solo and chamber music to colorful, carefully crafted pieces for orchestra.

Recordings of his music include Shadow Music with the Louisville Orchestra, The Transparency of Time with pianist Andre LaPlante and the Winnipeg Symphony, The Moon in the Labyrinth and The Lyre of Orpheus with harpist Judy Loman and the Orford String Quartet, Brass Quintet with the New Mexico Brass Quintet, Circus Music with the Hannaford Street Silver Band, and Ah, Matsushima! with violin/marimba duo Jacques and Michael Israelievitch.  Quartetto Gelato has recorded Ray’s brilliant arrangement of Maurice Ravel’s Le Tombeau de Couperin and has performed it worldwide.

The striking originality and meticulous craftsmanship of his music have been recognized by numerous grants and awards, among them prizes from the Manhattan Choral Ensemble, from the Percussive Arts Society, from the International Horn Society, and from Northwestern University. His contest winning orchestral Fanfare, opened Toronto’s Thomson Hall and his overture The North Wind’s Gift was performed throughout Europe in the 1991 tour of the Toronto Symphony. Six Canadian orchestras jointly commissioned Tales of the Netsilik for narrator and orchestra.

Ray Luedeke is an experienced librettist. He collaborated with playwright Sean Dixon for his first opera, Wild Flowers, produced at The Guelph Spring Festival. Subsequently, he worked with acclaimed director/dramaturge Tom Diamond to write the libretto for his second opera, The Magical Singing Drum, and the script for The Art of Love/Into the Labyrinth for two pianos, visuals and actor. The distinguished Canadian playwright Guillermo Verdecchia served as dramaturge for Ray’s script for his third opera, Viva Pablo Neruda (I Confess, I Have Lived).

In the summer of 2007, Ray started a music theater company, Voice Afire Pocket Opera and Cabaret, and produced three shows, each reflecting a particular passion of the composer/arranger. Viva Pablo Neruda (I Confess, I Have Lived) is based on the poetry of Pablo Neruda. Butterfly’s Trouble is an re-invention of Puccini’s great masterpiece. Close Embrace relives the Golden Age of Argentine Tango and includes 8 performers: a Master of Ceremonies, 2 dancers, 4 musicians, and a singer.

From 1981-2010 Ray served as Associate Principal Clarinet of the Toronto Symphony Orchestra. In the summer of 2010 Ray moved back to New York City.