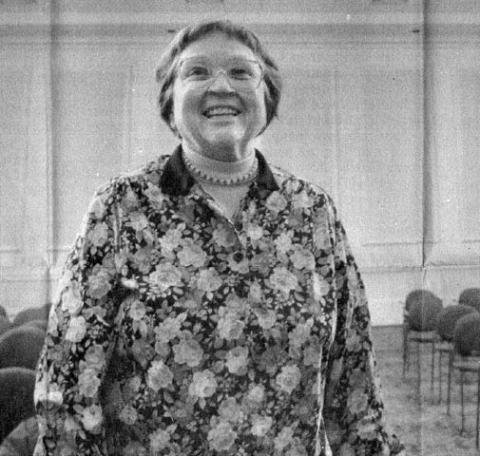 Edith Borroff (b. 1925) received her education at Oberlin Conservatory, the American Conservatory of Music and the University of Michigan. She has taught at Hillsdale College, University of Wisconsin at Milwaukee and has been professor of music at Eastern Michigan University since 1966. Her areas of research have centered on 17th-century French chamber music, American and contemporary music. Borroff also holds an interest in education and has contributed to many educational journals. She became the contemporary music critic for the Ann Arbor News in 1966. She authored the book Three American Composers (Pub. Univ Press of America, 1986) which traces the power shift from the apprentice/conservatory system of training composers to the university system, which took place in the United States from 1925 to 1975. Borroff focuses on how this change influenced the works of three renowned American composers: Irwin Fischer, Ross Lee Finney, and George Crumb.

In addition to her renown as a composer, Dr. Borroff taught at a number of colleges and universities, including SUNY-Binghamton, where she spent the bulk of her career. Her areas of research centered on 17th-century French chamber music, American and contemporary music, music education, and pre-history. Borroff  has authored numerous books including the first history of music to include African-American composers.  Edith Borroff’s papers are housed in the Newberry Library in Chicago, and include her writings, musical compositions, correspondence, research materials, and lectures as musicologist and composer.

(Bio below by Lynn Vought, All Music Guide)

Edith Borroff (b. 1925) was born in New York City, the daughter of Marie Bergersen and Ramon Borroff, both well-known professional musicians. Trained in music from babyhood, she composed songs and piano pieces before she was six. In 1941 the family moved to Chicago; there, Borroff, who already knew she wanted to be a composer, earned a B.Mus. (1946) and M.Mus. (1948) in composition at the American Conservatory of Music, with an undergraduate minor in organ (including two years at Oberlin with Claire Coci) and a graduate minor in voice with the redoubtable singer Frances Grund.

It was not easy for American women composers to be taken seriously at that time. In 1954 Borroff went to Ann Arbor, where she earned her Ph.D. in the history of music at the University of Michigan in 1958. Since then, she has taught music history and composed music, retiring from the State University of New York at Binghamton in 1992.

From 1950 to 1954 Borroff taught at Milwaukee-Downer College, which was then a school for women students only. There she composed several choral pieces for women's voices, including "The Christ-Child Lay on Mary's Lap". The poem, by G.K. Chesterton, had long been a favorite, and it was natural for her to set it to music. In composing it, Borroff tried to incorporate both the form and the mood of the poem in the music.

Dr. Edith Borroff, pianist, composer, and musicologist, died peacefully on the evening of Saturday, March 9, 2019, in the Forest at Duke in Durham, North Carolina, the retirement community where she had been living.

Dr. Borroff was born in New York City, the daughter of the singer Ramon Borroff and the concert pianist Marie Bergerson Borroff.  She is survived by her sister, Marie Borroff, American poet, translator, and the Sterling Professor of English emerita at Yale University.

Dr. Borroff was educated at The Friends School in New York City, and the American Conservatory of Music where she earned the Bachelor of Music in 1946, and the Master of Music in 1948.  She received the Ph.D. in 1958, after studying musical composition with the musicologist Louise Cuyler at the University of Michigan at Ann Arbor.  Her dissertation was on the works of Jean-Joseph Cassanea de Mondonville.

Dr. Borroff held various teaching posts but finally settled at the State University of New York in Binghamton, 1973-1992.  Her Concerto for Marimba and Small Orchestra received its premier with the University orchestra in 1981. Her areas of research centered on 17th-century French chamber music, American and contemporary music, music education, and pre-history.  Dr. Borroff has authored numerous books including the first history of music to include African American composers.  Her papers are held at the Newberry Library, The University of Chicago, and include her writings, musical compositions, correspondence, research materials, and lectures as musicologist and composer.