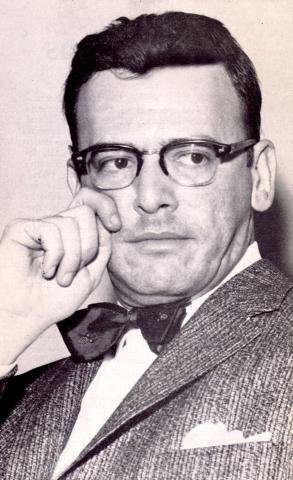 An American composer who worked primarily in the Washington DC area, Robert Parris (1924 - 1999) was a Juilliard student who later studied with Luening and Copland, though he counted their influence on his music as "minimal."

Known as a musical colorist, Parris specializes in small ensembles, and has been known to push instruments to the limits of virtuouso playing -- his solo violin sonata is considered quite difficult, and the composer-directors of CRI believed his trombone concerto to be unplayable until they heard a recording of it. A longtime professor at George Washington University; Parris has had his works performed by Mstislav Rostropovich and the NSO.

In the early seventies, he turned to Borges for inspiration and produced the marvelous Book of Imaginary Beings, (I) a work for flute (pic), violin, cello, piano, celeste, and percussion, from 1972. Part II was published in 1983.

Parris got his first international recognition in 1958 with his concerto for five kettledrums and orchestra, premiered by Fred Begun, and the National Symphony in Washington, under Howard Mitchell. CRI recorded a number of his works, and ACA is the largest distributor of his music, with more than 65 works available for sale and rental.

Archival materials are found at Special Collections in Performing Arts at the University of Maryland, and at the Library of Congress.