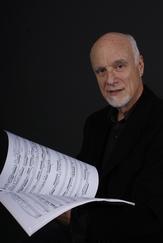 David Evan Jones is a composer with publications in chamber opera, chamber music, computer music, and contemporary music theory. Some of his theoretical and compositional work focuses on structural relationships between phonetics and music.

Jones has worked extensively in computer music, composing in residence at the Elektronmusikstudion (EMS) in Stockholm, at L'Institut de Recherche et de Coordination Acoustique/Musique (IRCAM) in Paris, and at Bregman Electronic Music Studio at Dartmouth College (USA) where he co-founded, with Jon Appleton, the Dartmouth graduate program in Electro-Acoustic Music.

Jones' compositions have been recognized by grants from the National Endowment for the Arts, the California Arts Council, and the New Hampshire Arts Council.  He has been honored by a first prize award in the Premio Ancona International Composition Competition (Italy), first prize in the national competition sponsored by the American New Music Consortium, and first prize in the MACRO International Composition Competition (USA). He has received Honorable Mentions in the Prix Ars Electronica, Austria, and in the Bourges (France) Electro-Acoustic Music Competition.

His first chamber opera, Bardos, received its professional premiere at Hoam Hall in Seoul, Korea in 2004.  He has recently published a CD of "Neo-Balkan Jazz and Concert Music" on Centaur Records and is at work on a second CD of recent chamber music.