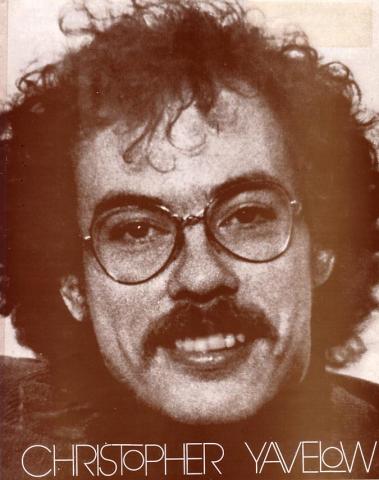 Chris Yavelow received graduate degrees from both Boston University and Harvard University. He earned diplomas from the Franz Liszt Music Academy in Budapest, the Darmstadt Internationale Ferienkurse in Germany, and in France: the Conservatoire Darius Milhaud, and the Conservatoire Américain de Fontainebleau--the latter followed a year of private study with Nadia Boulanger. He has held teaching positions at the University of Texas (Associate Professor and Composer in Residence), Schiller College (Music Department Chairman), and Harvard (Teaching Fellow). From 1988 through 1993 inclusive, he taught composition and theory at Claremont Graduate University in California.

Yavelow is an award-winning composer and author with seven books on computer music and multimedia to his credit. In the 1980s, he established an international reputation as a visionary journalist about the future of music and computers. By the 1990s, he had written hundreds of articles for such publications as Macworld, Electronic Musician, Byte, Computer Music Journal, Macromedia Journal, and New Media Magazine.

As a composer, Yavelow has been honored with more than three dozen international awards and fellowships; for example, his “Dona Nobis Pacem,” was unanimously awarded the grand prize at the Rencontres Internationales du Chant Choral in France. The National Endowment for the Arts commissioned one of his operas, The Passion of Vincent van Gogh. Later, the National Institute of Music Theater sponsored his award-winning chamber opera, Countdown,* which went on to receive accolades as the first computer-assisted opera, the first virtual orchestra performance in 1987, and the first opera in cyberspace in 1994. He has received residency fellowships from the likes of the MacDowell Colony and the Cummington Community of the Arts in America, and the Camargo Foundation and Cité des Arts in France.

His 1400-page Macworld Music and Sound Bible was the first “Bible” book published by IDG, and it was their first book to win a Computer Press Association Award. Named one of Mix Bookshelf’s “Top Twenty Titles,” Yavelow’s Music and Sound Bible was the Main Selection for the Small Computer Book Club, and was subsequently translated into Japanese. Following that success, he co-authored Mastering the World of QuickTime (Random House) and two book/CD-ROM combos: Multimedia Power Tools (Random House) and Macintosh Virtual Playhouse (Hayden). Later, he was the editor of A-R Editions’ acclaimed Computer Music and Digital Audio book series for four years.