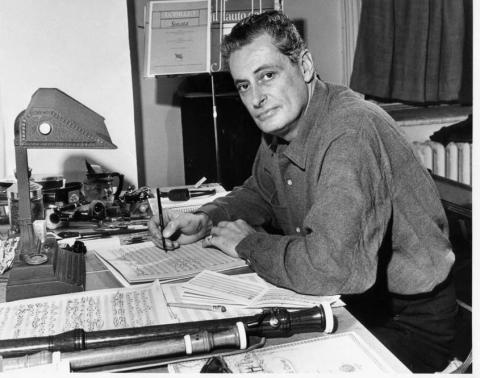 Charles (Borromeo) Mills (b. Asheville, N. Carolina, Jan. 8, 1914; d NY,  March 7, 1982), was an American composer.  Played in jazz bands from age 17.  In 1933 he went to N.Y. and engaged in serious study of music, first with Max Garfield and then with Copland (1935–37), Sessions (1937–39), and Harris (1939–41). Winner of several prizes including the Guggenheim fellowship in 1952.  He composed chamber and orchestral works including film music and ballets, and vocal music including sacred choral works. He wrote mostly in a severe but eloquent contrapuntal style; in virtually his entire career as a composer, he pursued the ideal of formal cohesion; his style of composition may be described as Baroque a l’americaine. In his later works, Mills gradually adopted serial methods.  His quest for artistic self-discipline led him to the decision to become a Roman Catholic. He was baptized according to the Roman Catholic rite on May 14, 1944. He was commissioned by Mitropoulos to compose work for NYPO, 1951. Principal works include 6 symphonies; piano concerto; flute concerto; Theme and Variations for orchestra; oboe concertino; and many chamber works, some involving jazz ensembles.

Mills began affiliation with American Composers Alliance in 1955, with the signed recommendations of Copland, Cowell, and Carter.