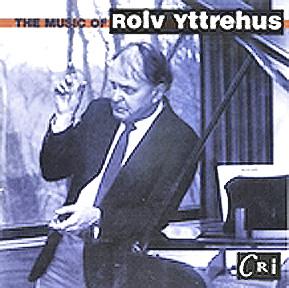 Rolv Yttrehus (1926-2018) who regards Schoenberg and Sessions as his principal influences, was born 1926 in Duluth, Minnesota. He holds degrees from the University of Minnesota-Duluth, the University of Michigan, and in 1962, received a diploma from the Accademia Di Santa Cecilia in Rome. He studied harmony with Nadia Boulanger, and composition with Ross Lee Finney, Roger Sessions, Aaron Copland, and Goffredo Petrassi. He is professor of music emeritus, Rutgers University.  See interview with the composer by Bruce Duffie here.

Yttrehus regarded Schoenberg and Sessions as his principal influences. He received numerous awards, including grants from the National Endowment for the Arts and the New Jersey State Council on the Arts. His music was performed at the Fromm Festival in Tanglewood, the ISCM World Music days USA, and frequently in New York by such groups as The Juilliard Ensemble, the Da Capa Chamber Players, The Group for Contemporary Music, Parnassus, and Ensemble 21. His Gradus Ad Parnassum was recorded by the Louisville Orchestra. Professor Yttrehus gave a lecture on this work at the Internationale Ferienkurse fuer Neue Musik in Darmstadt, Germany in 1994. His Espressioni Per Orchestra received critical acclaim after its performance by the Philharmonic Orchestra of Augsburg, Germany in 1996. The Warsaw National Philharmonic Orchestra performed his Symphony Number One in the Warsaw Autumn Festival in 1998.