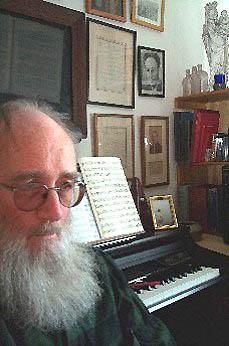 Peter Pindar Stearns was born in New York City on 7 June 1931 of musician parents, whose New England roots can be traced back to 1630. His father, Theodore Stearns, was a composer and an opera and musical comedy conductor - well-known in the early years of the last century. The elder Stearns' opera, Snowbird, produced in Dresden in 1924, was the first American opera to be premiered in Europe. In addition he held regular positions as a music critic and commentator in Chicago and New York.

Stearns' mother, known professionally as Marguerite Lamar, was a lyric soprano of note. She was a protégée of Mary Garden and sang with the Chicago Lyric Opera Company in addition to recital work, specializing in the French chanson. Peter's father moved the family to Los Angeles in 1932 where he had been appointed to the music faculty at UCLA.

Peter grew up there and attended public and private schools in the environs of Los Angeles. He began the formal study of music theory and composition privately with Leonard Stein at the age of fifteen, although he had already begun to compose on his own three years earlier. Returning to New York at the age of eighteen he enrolled in the Mannes Music School where he earned the Artist's Diploma in 1952. There he studied with, among others, Bohuslav Martinu in composition, Felix Salzer in theory and Schenkerian analysis and Julia Fox in organ.

In later years he was an organ student of Jesse Walker. Upon graduation from Mannes, Stearns went back to Los Angeles to work in the film industry, and studied there with Miklos Rozsa. By 1954 he was back in New York and a part of the creative life of that city. His compositions began to appear on programs in the various concert halls of New York and elsewhere. In 1957 he was appointed to the faculty of Mannes where he remained for the next thirty-two years. He also taught briefly at Yale University and at the Wykeham Rise School in Connecticut. During his years at Mannes, Stearns developed the composition curriculum, serving fifteen years as head of the Composition Department.

In addition to composition classes and private lessons, he has taught orchestration, theory and ear training as well as graduate seminars in music history. His interest in the development of young musicians led him for a time to the directorship of the Preparatory Division of Mannes. His output of over 300 musical compositions in all media includes seven symphonies, six string quartets, numerous other orchestral and chamber works as well as a substantial amount of organ and choral pieces.

He has been a member of The American Composers Alliance since 1963 and served two terms on its Admissions Committee. Stearns has had an active auxiliary career in several related areas. As an organist and choral director he served various churches. He worked for Carl Fischer, Inc. as an editorial assistant and was Director of Publications for Coburn Press Music Publishers for eight years. He also worked as an organ builder under Charles B. Fisk and Robert Noehren. Stearns and his wife, Marcia, lived in Vermont. They are the parents of three: a violinist, an actress and an organic seed producer (High Mowing Seeds).  Peter Pindar Stearns passed away on Oct. 15, 2016 in Stowe, Vermont.