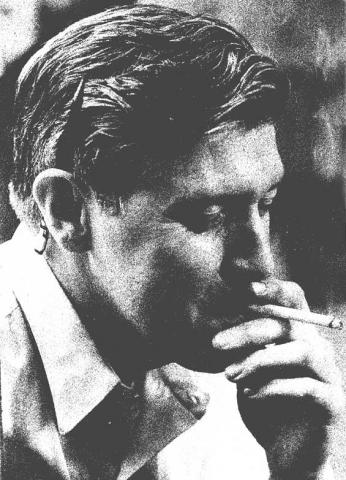 Hall Franklin Overton was born in Bangor, Michigan, on February 23, 1920. He was the first of three sons born to Stanford and Ruth (Barnes) Overton and grew up in Grand Rapids, Michigan. As a youngster in this small mid-western town, he found that his few piano lessons didn't satisfy his longing for that elusive "something" he was seeking in music. He was fortunate in having a high school music teacher who recognized his gift, and urged him to study at The Chicago Musical College. It was there that he studied theory and composition from 1940 to 1942. The latter year marked his entry into the armed services, and from 1942 until 1945 he served in overseas combat duty with the U.S. 3rd Armored Division. It was during that time that he learned to play jazz.

Upon his discharge from the army he pursued his musical studies at The Juilliard School of Music, studying composition with Vincent Persichetti. He graduated in 1951 with an M.S. degree, and then became a member of the faculty there. In later years he also taught at The Yale School of Music and The New School of Social Research. He received awards from both The Koussevitzky Foundation and The John Simon Guggenheim Memorial Foundation. His New York City loft at 821 Sixth Avenue, sublet from David X. Young in 1954, provided the perfect setting for jazz musicians to jam into the wee hours. The October 2000 release of Jazz Loft comprises many hours of these priceless sessions recorded by Young. Among his private students were many jazz greats as well as billionaire Doris Duke. While he was writing his classical compositions, he was also deeply immersed in jazz. He recorded with such notables as Stan Getz, Duke Jordan, Jimmy Raney and Teddy Charles. Thelonious Monk selected him to score his piano works for full orchestra. A performance of these compositions in New York City was recorded live on February 28, 1959 and released on the album The Thelonious Monk Orchestra At Town Hall.

In 1963 Monk recorded a second live album with orchestra arrangements by Overton at the New York Philharmonic Hall titled Big Band And Quartet In Concert. His opera, Huckleberry Finn, commissioned by the Barney Jaffin Foundation, was presented by The Juilliard Opera Company just months before he died on November 24, 1972. He married Nancy Swain in 1949, and they had two sons: Richard Adair (Rick) Overton and Steven Swain Overton. Rick is a comedian/actor/writer now living in California, and Steve is in New Mexico pursuing both music and advanced math. He is also survived by his brothers Harvey and Richard Overton. About his music, Hall Overton said:

"Since I am both a composer and active jazz musician, my work reflects both of these sources of musical experience. As a composer, my main interest has been in the exploration of non-systematic, intuitive harmony, both tonal and dissonant from which other elements -- melody, counterpoint and form -- can be derived. "I am not particularly concerned whether this places me in the middle of the road, left or right. Or even if there is such a thing as a road to be on or off. There are only individual expressions for which we must find the right language. Some are good, some are bad. "My attitude towards jazz is one of deep respect. Having attempted to master this difficult and exacting art for several years, with some small degree of success, I feel that I have come to know it in a way that is possible only through actually performing and creating in this idiom. "Jazz has had a strong influence on my compositional style, but purely on a subconscious level. For I am opposed to the practice of trying to make jazz respectable through the unnatural imposition of classical forms or materials."

Hall Overton was a player, composer, arranger and perhaps most importantly... a teacher. (Article information provided by Nancy Overton. From post by Jack Reilly) Review of Opera "Huckleberry Finn" The New York Times, May 16, 1971 This 'Huck Finn' Is Not for Children By RAYMOND ERICSON The Juilliard Opera Center's last premiere, given in late March, was Harold Farberman's "The Losers." It was about today's youth, specifically a gang like Hell's Angels. The company's next premiere, due this Thursday and Saturday, is about the youth of another and more innocent era, the characters in Mark Twain's "Huckleberry Finn." The opera is by Hall Overton, a 51-year-old composer on the Juilliard faculty. He collaborated on the libretto with Judah Stampfer. Overton was commissioned to write an opera dealing with youth, which would hopefully appeal to young people and relate to the way they feel today.

The composer thought the Twain novel would fill the bill. "Huck," he says, "was concerned over issues of conscience, over moral issues. He rejected civilization as he saw it. He ran away from it. His main goal was to run to some place where he could be free. His strongest relationship was with a black man." Overton says that the libretto will not please everybody, because they had to leave so much out. "We have concentrated on three main areas: the characters and relationship of Huck and Jim; crowd scenes -- it was important that they be represented because Twain uses them as a foil for the closed world of Huck and Jim; and the symbolic forces of the river and the raft and the freedom that seems to be there wherever the river takes you. "We have tried to preserve Huck intact as much as possible. He is what he is in the novel except that we have advanced his age from 13 to 16. Jim's character is altered somewhat. He represents an older, wiser man who instructs in his own way. Towards the end, we have made a real change, Jim is freed, as in the novel, by his former owner, but instead of going back with Huck and Tom Sawyer, he takes off on his own to continue his original mission to free his immediate family."

Overton waited until he had a workable libretto before he developed the opera's musical style. "The thing I felt had to be preserved was the language. Twain is a master of the vernacular, and I had to start with that. I took the rhythms and inflections of the spoken language and wrote a continuous recitative, with arias, in most cases, being implied. The music is sometimes dissonant, sometimes very tonal, but at all times, I hope, consistent with the aim of the piece -- the American language as Twain so truly recorded it. I have utilized by background in jazz for Jim." People who have heard about "Huck Finn" have frequently asked if it is a children's opera. Definitely not. It is a serious opera by a serious, well-regarded composer.