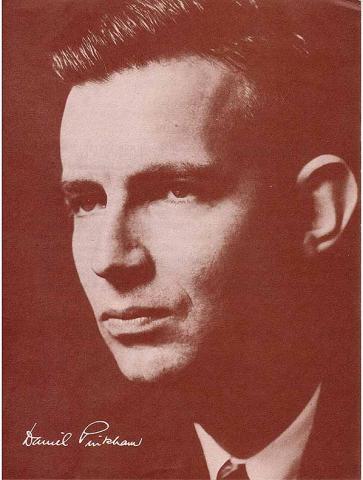 Daniel Pinkham was born in Lynn, Massachusetts on 5 June 1923. He studied organ and harmony at Phillips Academy, Andover, with Carl F. Pfatteicher; then at Harvard with A. Tillman Merritt, Walter Piston, Archibald T. Davison and Aaron Copland (A.B. 1942; M.A. 1944). He also studied harpsichord with Putnam Aldrich and Wanda Landowska, and organ with E. Power Biggs. At Tanglewood he studied composition with Arthur Honegger and Samuel Barber, and subsequently with Nadia Boulanger. Pinkham taught at Simmons College, Boston University, Dartington Hall (Devon, England), and was Visiting Lecturer at Harvard University (1957-58).

In 1950 he was awarded a Fulbright Fellowship and in 1962 a Ford Foundation Fellowship as a choral conductor. He is a Fellow of the American Academy of Arts and Sciences. He is on the faculty of the New England of Conservatory of Music where he is senior professor in the Musicology Department. Pinkham was Music Director Emeritus of historic King’s Chapel in Boston where he actively served from 1958 until 2000. He was the recipient of six honorary degrees: Litt D., Nebraska Wesleyan University, 1976; Mus. D., Adrian College, 1977; Mus. D. Westminster Choir College, 1979; Mus. D. , New England Conservatory, 1993; Mus. D., Ithaca College, 1994; Mus. D., Boston Conservatory, 1998.

Pinkham was a prolific and versatile composer whose catalog includes four symphonies and other works for large ensembles; cantatas and oratorios; concertos and other works for solo instrument and orchestra for piano, piccolo, trumpet, violin, harp and three organ concertos; theatre works and chamber operas; chamber music; electronic music; and twenty documentary television film scores. Pinkham’s orchestral works have been played by major orchestras in the United States including the New York Philharmonic under the direction of Leonard Bernstein, The Buffalo Philharmonic (which he conducted in the premiere of his Organ Concerto Number One), the Boston Pops Orchestra under the direction of John Williams and by the composer himself, the Portland Symphony Orchestra, the Louisville Symphony Orchestra, the Orquestra Sinfonica Nacional de Mexico and many others.

In June 1994 the London Symphony Orchestra recorded his Symphony Number Three and Symphony Number Four, Serenades for Trumpet and Symphonic Wind Orchestra and Sonata Number Three for Organ and Strings with the American organist James David Christie as soloist. In 1995 Dr. Christie premiered his Organ Concerto Number Two with the Rheinland Philharmonic Orchestra in Koblenz, Germany. In May 1997 Ray Cornils premiered his Organ Concerto Number Three with the Portland (Maine) Symphony Orchestra. In 1990, Pinkham was named Composer of the Year by the American Guild of Organists. In 1996 Daniel Pinkham received the Alfred Nash Patterson Foundation Lifetime Achievement Award for contributions to the Choral Arts. Daniel Pinkham passed away on 18 December, 2006 © 2007 Daniel Pinkham. All rights reserved