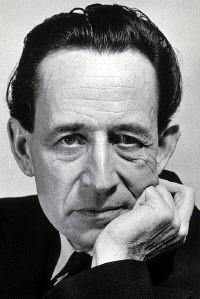 Born in Paris, on March 23, 1895, Dane Rudhyar moved to the United States in 1916, where he soon became known as a ultra-modern composer whose ideas about dissonant harmony influenced such composers as Ruth Crawford Seeger, Henry Cowell and Carl Ruggles. Rudhyar was also a painter, philosopher, and author of many books about astrology, psychology, and the cyclical nature of civilization.

At age twelve, a severe illness and surgery disabled him and he turned to music and intellectual development to compensate for his lack of physical agility. He studied at the Sorbonne, University of Paris (graduating at age 16) and at the Paris Conservatoire. His early ventures into philosophy and association with the artistic community in Paris led to his conviction that all existence is cyclical in character.

His music led him to New York City in 1916, where he composed some of the first polytonal music performed in the United States. He also met Sasaki Roshi, one of the early Japanese Zen teachers in America, who led him in the study of Oriental philosophy and occultism. His interest was further stimulated by his association with Theosophy, which began when he was asked to compose music for a production at the society's headquarters in Los Angeles in 1920. Rudhyar became a naturalized citizen of the United States in 1926. He stayed in California (often commuting to New York) through the 1920s and in 1930 married Marla Contento, secretary to independent Theosophist Will Levington Comfort. Comfort introduced Rudhyar to Marc Edmund Jones, who in turn introduced him to astrology.

Rudhyar learned astrology during a period when he was also studying the psychological writings of Carl G. Jung, and he began to think in terms of bringing astrology and Jungian psychology together. The marriage overcame some basic problems of astrology, including its deterministic approach to life and the trouble of designating an agreeable agent to produce the astrological effects. Rudhyar postulated that the stars did not cause the effects seen in human life but were pictures synchronistically aligned to human beings. They detailed psychological forces working in individuals, but did not override human freedom in responding to those forces, he said. At first he called his new interpretation "harmonic astrology" and as the ideas matured renamed it "humanistic astrology," the subject of his monumental volume, The Astrology of Personality, published in 1936. A friend, Theosophist Alice A. Bailey (the person who invented the term New Age), encouraged the development of his thought and published his book on her press, Lucis Publishing.

Over the next two decades Rudhyar continued to write and lecture on astrology, but while he was honored within the astrological community he was little known outside of it. It was not until the 1970s, as the New Age movement emerged, that major publishing houses discovered him and began to publish his writings: among the first was The Practice of Astrology, published in 1970 by Penguin Books.

In 1969 Rudhyar founded the International Committee for Humanistic Astrology, a small professional society that would work on the development of his perspective. He began one of the most fruitful periods of his life, turning out several books a year for the next decade. He began to absorb the insights of transpersonal astrology, which concentrated on exploring altered and exalted states of perception, and by the mid-1970s had moved beyond humanistic astrology to what he termed "transpersonal astrology." He also began to reflect upon the New Age movement and wrote several of the more sophisticated volumes on planetary consciousness and New Age philosophy.

scores and parts also at the Fleisher Collection:

SURGE OF FIRE  (ACA also has score and parts to this work)
OURANOS (with a note: Not to be used. Now replaced by COSMIC CYCLE totally revised and reorchestrated for large orchestra 1981 (ACA has oversize score and parts for Cosmic Cycle 1982)
FIVE STANZAS for string orchestra  (ACA does not have)
SINFONIETTA (note: Fleisher has the ONLY set of parts in existence for this work) (ACA has the score for Sinfonietta)
TO THE REAL (ACA has research-quality print master of full score only, ng for performance)
THRESHOLDS  (ACA has full score orch by G. Champion, and reduced score photocopy)
COSMIC CYCLE   (ACA has this score/parts)
DIALOGUES  (ACA has score and parts)