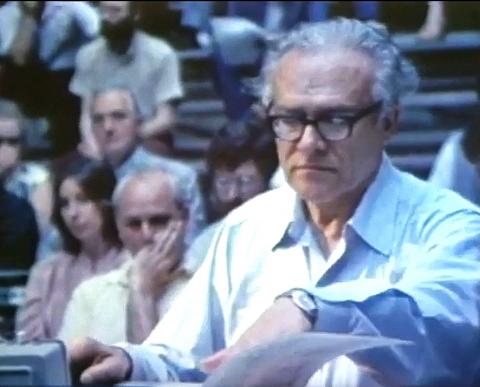 Vladimir Ussachevsky (1911- 1990)  emigrated to the USA from Russia in 1930, was one of the pioneers of "tape music", creating the first electronic music in 1951 with his teacher Otto Luening. In October 1952, a live concert of electronic music by Luening and Ussachevsky at New York's Museum Of Modern Art was broadcast live, and caused a sensation. It included Ussachevsky's Sonic Contours (1952), which electronically modifies the sound of a piano. Ussachevsky was one of the most significant pioneers in the composition of electronic music, and one of its most potent forces. He produced the first works of “tape music,” a uniquely American synthesis of the French musique-concrète and the German pure electronic schools. He co-founded the Columbia-Princeton Electronic Music Center in 1959 and directed its course for the next twenty years as the leading electronic music studio in the United States. Two of his most powerful and innovative scores include Suite from No Exit (1962), from the film of Sartre’s play No Exit directed by Orson Welles, and the soundtrack for the avant-garde film, Line of Apogee (1967).

Other legendary works that Ussachevsky composed in this period were A Poem In Cycles And Bells (1954) for tape and orchestra (one of the earliest electro-acoustic pieces), which was based on Otto Luening's Fantasy In Space (1952) and his own A Poem In Cycles And Bells, and Piece for Tape Recorder (1956) for tape. Creation Prologue (1961), Conflict (1971) and Creation Epilogue (1971), three parts of the multi-movement large-scale Creation, were scored for choirs and electronics.