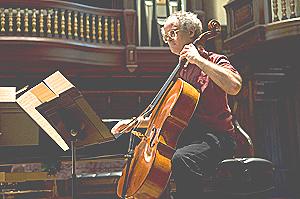 Tom Flaherty has received grants, prizes, awards, and residencies from the National Endowment for the Arts, American Music Center, the Pasadena Arts Council, the Massachusetts Council for the Arts and Humanities, the Delius Society, the University of Southern California, "Meet the Composer", and Yaddo. Published by Margun Music, Inc. and American Composers Editions, his music has been performed throughout Europe and North America, and is recorded on the Klavier, Bridge, SEAMUS, Capstone, and Advance labels. He earned degrees at Brandeis University, S.U.N.Y. Stony Brook, and the University of Southern California; his primary teachers in composition include Martin Boykan, Bülent Arel, Robert Linn, and Frederick Lesemann. A founding member of the Almont Ensemble, he currently holds the John P. and Magdalena R. Dexter Professorship in Music and is Director of the Electronic Studio at Pomona College. He is an active cellist in the Los Angeles area.