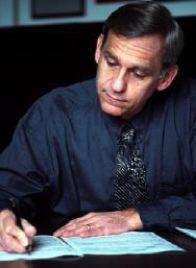 A native of Cleveland, Ohio, Roger Vogel studied music theory and composition at the Ohio State University and earned the Ph. D. in 1975. His major professors were Marshall Barnes, Jay Huff, Norman Phelps, and Wolf Rosenberg.

A productive composer, Dr. Vogel has over 120 compositions and several journal articles to his credit. Since he joined the faculty of the University of Georgia in 1976, Dr. Vogel has written over 100 original works which have been published by eleven different publishing firms. Notable among his awards are prizes from the Roger Wagner Choral Composition Competition, the National Saxophone Workshop Composition Contest, the National Flute Association, and the Delius Composition Competition. He has received commissions from the Georgia Music Teachers Association , the University of Georgia , Sigma Alpha Iota Professional Women's Music Fraternity, Phi Mu Alpha Professional Men's Music Fraternity , the Helios Duo , The Fellowship of Reason® , the Athens Master Chorale, theMedical College of Georgia, Georgia 'Cello Society, and the Bass Club of Georgia . His works have been performed in recitals and at conventions and festivals throughout the United States, South America, and Europe.