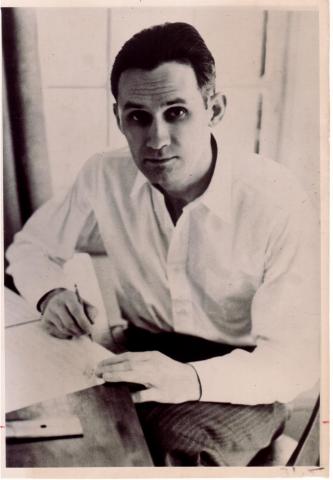 Roger Goeb, a composer whose works were admired for their deft coloration and inherent lyricism, died on Jan. 3, 1997 at the Parker Jewish Geriatric Institute in Queens. He was 82 and lived in Rockville Centre, L.I. Mr. Goeb composed prolifically for orchestra and chamber combinations, and from the late 1940's through the early 1960's his music was performed frequently. Leopold Stokowski gave the world premiere of his Third Symphony in a live broadcast concert in 1952 and later recorded it. He was also active in the American Composers Alliance, which supports the performance, broadcast and recording of contemporary works.

Mr. Goeb was born in Cherokee, Iowa, in 1914. After early piano studies, he took up the trumpet, French horn, viola, violin and woodwind instruments. At the University of Wisconsin, he played in jazz bands and completed a degree in agriculture. But after hearing a Beethoven concert by the Budapest String Quartet, he decided to pursue his musical studies more seriously, and in 1938 he enrolled at the Ecole Normale de Musique in Paris, where he studied with Nadia Boulanger. In 1939 he returned to the United States and continued his studies, privately with Otto Luening and at New York University, the Cleveland Institute of Music and what was then the State University of Iowa in Iowa City, where he taught harmony, counterpoint and orchestration during the 1944-45 academic year, while completing his doctorate and the first of his five symphonies.

In the late 1940's he taught orchestral instruments at Bard College, and from 1946 to 1962 he taught a summer course at the Bennington Composers Conference in Vermont. He received Guggenheim Fellowships in 1950 and 1951. Besides his symphonies, Mr. Goeb's works include violin and piano concertos, the ''American Dances'' for string orchestra, a quintet for trombone and strings and four string quartets. Family illness led him to give up composing for more than a decade, starting in 1964, but after the death of his wife and his son, both from multiple sclerosis, he began composing again. The last of his five symphonies was completed in 1981. He composed 25 more works by 1986, when his activity was limited by a stroke.

He was survived by his daughters, Marilou Goeb of Manhattan and Kathleen Richards of Chicago.