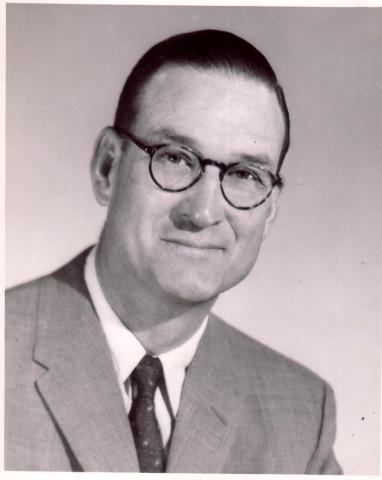 Robert Guyn McBride, University of Arizona Music Professor Emeritus, died July 1, 2007. He was born in Tucson, Arizona Territory, on February 20, 1911. Robert is survived by Carol, his wife of 66 years; their daughter, Marion of Irvington, NY; their son, Lawrence (Barbara) of Arlington, VA; and by grandchildren, Karin Sosis, Andrew Sosis, Lindsay McBride, and Graham McBride. Bob's musical talents matured at the UA, where he received a Master of Music degree in 1935. This "desert rat" then taught at Bennington College in Vermont, where he met and married Carol. In 1945 he moved to New York City to write music for films. As television supplanted short subjects at the movies, he returned in 1957 to Tucson and the UA to teach composition. Skilled as an instrumentalist (oboe, English horn, clarinet, and saxophone), Bob performed widely at colleges and with orchestras. His compositions were played by major orchestras and chamber groups, and were published and recorded. His music, often with catchy titles, ranged from serious to whimsical: opera, jazz pieces, modern dance scores, instrumental solos, chamber pieces, and orchestral works. He received a Guggenheim Foundation grant in 1937, and in 1942 the American Academy of Arts and Letters awarded him a prize for "writing a new idiom and expression" in modern American music. Later, the UA honored him with a Medallion of Merit. Bob was a true gentleman whose great patience and wonderfully agreeable nature endeared him to his family, friends, and students. An achievement Bob especially enjoyed was scoring 11 holes-in-one at the local par three course, the last at age 92.