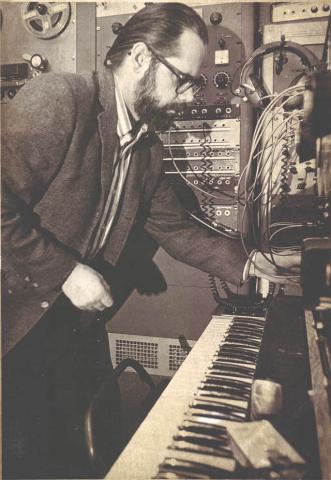 PETER TOD LEWIS (b.1932, Charlottesville, Va.) has lived on both coasts, has attended the University of California at Santa Barbara (B.A.), U.C.L.A. (M.A.) and Brandeis University in Massachusetts, studying with Arthur Berger, Morton Feldman, Irving Fine, and Lukas Foss.  He received the Wechsler Commission at Tanglewood in 1961, and has been a fellow at the Huntington Hartford Foundation and at the MacDowell Colony. In 1962-63 he lived abroad, principally in Mallorca. In 1968-69 he was composer in residence at both Southern Illinois University and the Metropolitan Educational Center for the Arts in St. Louis. Since 1969 he has been Director of the Electronic Music Studios at the University of Iowa. In 1975 he received a grant to work as visiting composer at the Institute of Sonology in Utrecht, Holland, and also realized a commissioned work in the studios of the Groupe de Musique Experimentale de Bourges in France. In addition to numerous works for tape alone, tape and film, and tape and instruments, he has written many works for chamber ensembles, solo piano, voice, and orchestra. In
1969 he became director of the Electonic Music Studios at the University
of Iowa, a position he held until his death in 1982. Recordings of his music can be found at New World Records.