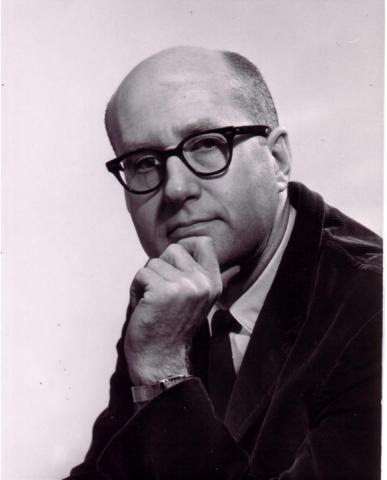 Frederic Goossen (1927-2011) was educated at the University of Minnesota, completing a PhD in 1954 under Donald Ferguson (composition), James Aliferis (composition and theory), and William Lindsay (piano). He also studied privately with Arthur Shepard (composition) and Melville Smith (counterpoint) at the Longy School of Music, Cambridge, Mass.

Goossen has composed over 100 works in a variety of genres, many of which have been recorded by CRI, New World, and Opus One.

After teaching at University of Minnesota and Berea College (KY), Mr. Goossen joined the faculty of of University of Alabama where he remained as Professor of Composition and Director of Graduate Studies until retiring as Professor Emeritus.

In 1991 Mr. Goosen received an award from the American Academy of Arts and Letters for lifetime achievement in music composition.

Jacob Frederic Goossen passed away June 10, 2011. He was born in St. Cloud, Minnesota July 30, 1927, the only child of the late Jacob F. and Marcia Eldred Goossen. He was educated in the public schools of St. Cloud and graduated from Technical High School in 1945. He attended the University of Minnesota, Minneapolis, receiving a Bachelor of Arts degree in music in 1949 and a Master of Arts in 1950. After private musical study in Cambridge, Massachusetts, and a period working as a newspaper reporter, Goossen returned to the University of Minnesota to take a Doctor of Philosophy degree in 1954.

Following three years on the faculty of Berea College, Kentucky, where he met and married his wife Shirley Reed  Goossen, he joined the music faculty of the University of Alabama in 1958, a position he held until his retirement from the University in 1996. During his tenure at Alabama, Goossen taught all aspects of musical composition and theory and served for 25 years as Director of Graduate Studies in Music.

For nearly 40 years he wrote a weekly column on the fine arts for The Tuscaloosa News, and in his early years in Tuscaloosa served as the newspaper's regular music, art, and theater critic.

A composer, Goossen wrote nearly 150 works of music, many commercially published by ACA and recorded. In 1991 the American Academy of Arts and Letters bestowed upon him an award in recognition of his lifetime achievement in music. Goossen edited a volume of essays by the American composer Ross Lee Finney, published by the University of Alabama Press, and contributed regular book reviews to Choice Magazine of the Music Library Association. He wrote program notes for the concerts of the Tuscaloosa Symphony Orchestra and the String Quartet Society of Tuscaloosa, and maintained a voluminous correspondence with professional and personal friends worldwide.

Goossen's musical manuscripts and other papers are housed in an archive in the W.S. Hoole Special Collections Library of the University of Alabama. He was instrumental in preparing a similar archive for the materials of his late colleague, the composer Harry Garrett Phillips, and arranged for the inclusion of his own orchestral works, and for those of Phillips and of the American composer Arthur Shepherd in the Edwin A. Fleisher Collection of Orchestral Music in the Free Library of Philadelphia. A complete, bound, collection of Goossen's works is included in the music section of the Amelia Gayle Gorgas Library on the campus of the University of Alabama.

Goossen read widely in aesthetics, history, and in English and American literature. He was a member of the American Composers Alliance, New York, and a past president of the Southeastern Composers League. He was a lifelong Unitarian and for many years retained his membership in the First Parish, Unitarian-Universalist, of Cambridge, Massachusetts.