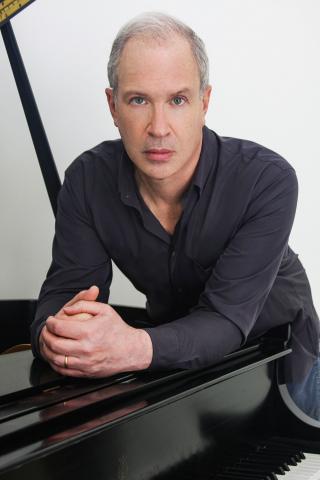 New York Pretending to be Paris, Eric’s collection of art songs on texts of contemporary poetry, was released by Albany Records in the fall of 2022.

Tokio Confidential, an original music-theater piece for which Eric wrote the music, lyrics and libretto, premiered at Atlantic Stage 2 in New York City, and a recording was released by Broadway Records. The New York Post said, “This lovely chamber musical about a Civil War widow whose life’s transformed by a tattoo artist reveals Eric Schorr, its composer/librettist, as a talent to watch. The romance between the central characters is touchingly etched. Running through it all are Schorr’s elegant score and graceful lyrics.” The New York Times said, “Tokio Confidential has plenty to recommend it, not least a plush and inviting score.”

Eric was commissioned by Virginia Stage Company to write the music, lyrics and libretto for The Rising Sea, a musical about science, poetry and climate change, that had its world premiere in Norfolk. The Virginian-Pilot called the piece “the kind of adventure that live theater should be” and WHRO called it “sheer magic…brilliant, absolutely brilliant.”

Eric wrote the music and lyrics for Young Tom Edison, a musical theater piece for young audiences, commissioned and produced by Theatreworks/USA. Young Tom Edison, with a book by Peter Parnell, opened at the Promenade Theater in New York City, after which it commenced a national tour. It subsequently played at The Kennedy Center in Washington, D.C.  A recording was released by Original Cast Records. Eric was also commissioned by Theatreworks/USA to write the music and lyrics for The Civil War: The South Carolina Black Regiment (book by Tanya Barfield), which also toured nationally. Eric has written specialty material for the Discovery Kids television network, and his music has been heard on television's Sesame Street.

Eric has composed scores for many other music-theater pieces, and he and his productions have received funding from the National Endowment for the Arts, Japan Foundation and the Ensemble Studio Theatre/Alfred P. Sloan Foundation Science & Technology Project.  Eric is a member of the Dramatists Guild and ASCAP, from which he has received numerous awards.  He studied at the New England Conservatory and holds degrees from Yale and Harvard Universities.  Eric is also a recipient of a Japan-United States Arts Program Fellowship from the Asian Cultural Council.