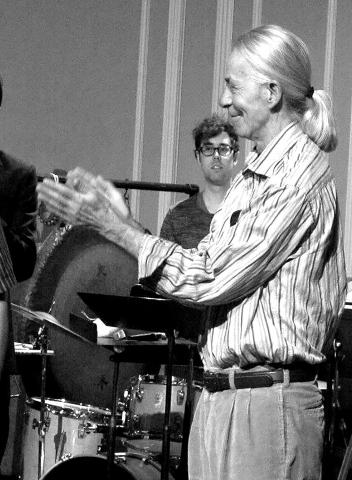 "We had never heard anyone like him before, and we haven't since." --Malcolm Peyton (2011)

Burr Van Nostrand (b. 1945) received a KOGO radio broadcast of his music when he was 16. He received his Master's Degree from the New England Conservatory. He also studied in San Diego with Jonathan Glasier and also with Howard Brubeck. His compositions have been performed worldwide. He lives in California.

Burr Van Nostrand is the author of a body of work unlike any other in American music. An active composer and cellist through the 1980’s, Van Nostrand was born in Los Angeles on December 30th, 1945. He received early training as a cellist, and began composing during his years at Hoover High School in San Diego, where he met the violinist Paul Severtson, who became a longtime collaborator.  Before entering the New England Conservatory (NEC) in 1964, his work was performed by the San Diego Symphony and the La Jolla Chamber Orchestra and his string trio, Trio Verbrougghe, won the Colman Chamber Music Competition.

Van Nostrand studied composition at NEC with Robert Cogan and graduated with a Master's degree in 1971. During this time he also studied cello at Yale with Aldo Pariso. By the end of 1971, he had settled in New Haven, CT. In addition to his activities as a composer, he was a cellist with the New Haven Symphony, and performed with many orchestras in the area.

Upon his graduation from NEC, he was an occasional guest lecturer in Malcolm Peyton's composition seminar at the Conservatory, and was invited by Pozzi Escott to lecture at Wheaton College. Through the 70s, Van Nostrand’s music was performed at the Museum of Fine Arts, Jordan Hall, the Longy School of Music, Yale University, the Smithsonian Institute in Washington DC, and the National Landmark Concert Series in New York.

Van Nostrand moved to the Netherlands in the early 70's, where his music was awarded prizes by the Gaudeamus Foundation and the Nathan Mass Foundation. His music was performed throughout the Netherlands as well as in Yugoslavia, where he was one of the subjects—along with Robert Cogan, Pozzi Escott, John Cage, and Harry Partch—for a documentary film about avant garde American music for TV Belgrade.

Van Nostrand returned to the US in 1978, settling in Florida. There, he appeared as a cellist with several orchestras, including the Ft. Lauderdale Symphony, Palm Beach Opera, Palm Beach Symphony, and the Miami Ballet. As a composer/performer, he received grants from the National Endowment for the Arts, and was commissioned by the California EAR Unit in 1988, for whom he composed Lovesongs of the Vampires (later retitled Nightlines)—the world premiere of which was conducted by Rand Steiger at the Los Angeles County Museum of Art. Burr returned to New Haven in 1988.