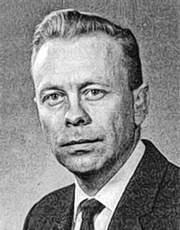 Richard Hervig was born in Iowa in 1917. Following a BA in English (Augustana College, Sioux Falls, SD) and some high school teaching (English and music) he studied composition with the late Philip Greeley Clapp at the University of Iowa, receiving the MA in 1941 and PhD degrees in 1947 in composition.

He has taught at Luther College, Long Beach State College, and the University of Iowa, where he was head of composition and theory. In 1966 he founded the Center for New Music; a widely recognized performance group specializing in 20th Century music.

Hervig is an honorary member of the American Composers Alliance.

Upon his retirement in 1988, he was appointed to a post at the Julliard School, where he was co-chairman of Literature and Materials of Music program. His pupils have included Charles Dodge and William Hibbard, among others. He has received commissions from the National Music Council, the National Federation of Music Clubs and numerous performers.

Hervig's compositions, most of which are instrumental and tonal, show a disciplined approach to standard forms and an exploration of timbral possibilities.
*Richard Hervig passed away in 2010 at age 92.  A memorial music service is planned for March 27, 2011 at the University of Iowa.