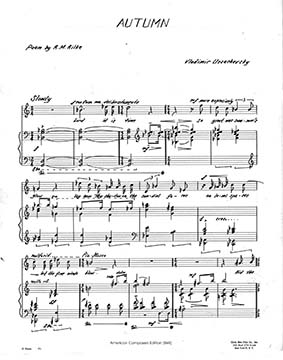 Two settings of poetry by Rilke, set in English by Vladimir Ussachevsky.  Known more widely for his electronic/tape music, these songs are intense and expressive.

Vladimir Ussachevsky (1911-1990) emigrated to the USA from Russia in 1930, one of ACA's founding composer members, was one of the pioneers of "tape music", creating the first electronic music in 1951 with his teacher Otto Luening. In October 1952, a live concert of electronic music by Luening and Ussachevsky at New York's Museum Of Modern Art was broadcast live, and caused a sensation. It included Ussachevsky's Sonic Contours (1952), which electronically modifies the sound of a piano. He co-founded the Columbia-Princeton Electronic Music Center in 1959 and directed its course for the next twenty years as the leading electronic music studio in the United States. These songs recorded here have been in the ACA catalog for over 60 years, and we are hearing them for perhaps the first time.

Peter Nelson-King is a multi-instrumentalist and composer from the Seattle area.  After receiving acclaim and honors in high school music fields, he went on to receive brass performance degrees from the University of Puget Sound and Boston University before returning to Seattle.  As a new music performer, he has premiered or helped premiere dozens of works by composers such as Gunther Schuller, Michael Finnissy, Carson Cooman, Joshua Fineberg and many others.  He founded the chamber ensemble Cursive and is a regular player with multiple orchestras and large ensembles in the Seattle area, and has performed his own compositions there and in Boston.