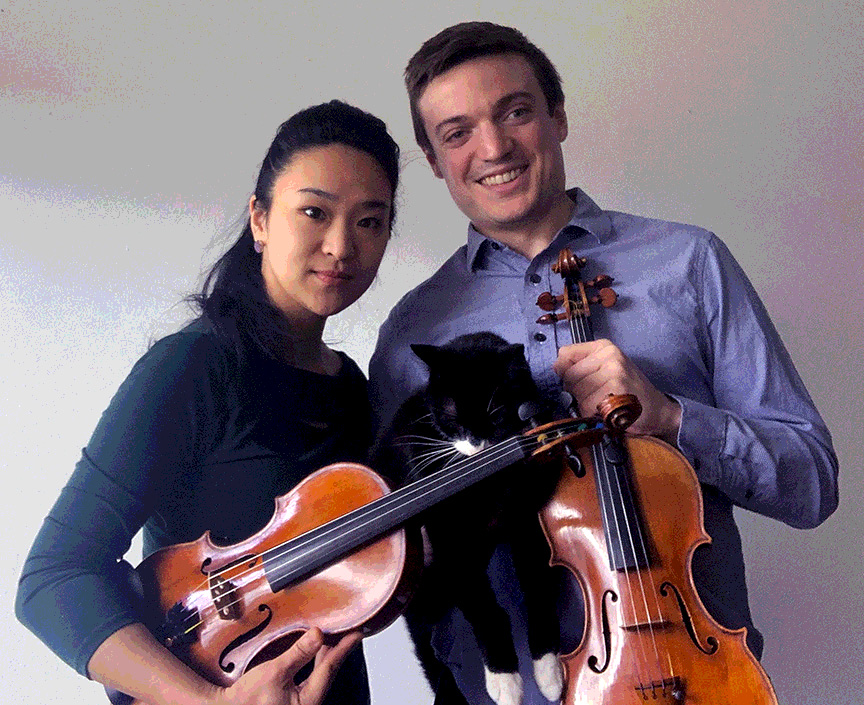 Violinist Eliot Heaton is the Concertmaster of the Michigan Opera Theatre, Des Moines Metro Opera, and the Saginaw Bay Symphony orchestras. He has also performed as a soloist and as a guest Concertmaster with a number of orchestras throughout the United States. Eliot studied at Oberlin College and Conservatory with Marilyn McDonald before attending the Indiana University Jacobs School of Music for graduate studies with Kevork Mardirossian. He is active in chamber music and new music, and appears regularly on a many concert series throughout North America. Eliot lives in Ann Arbor, MI with his wife, Ran Cheng, and their two cats.

Ran Cheng currently performs with the Detroit Symphony Orchestra, Grant Park Music Festival Orchestra, Toledo Symphony Orchestra and is acting concertmaster of Lansing Symphony Orchestra. She is also a prize-winning laureate of several international string competitions. As an active chamber musician, Ran has been a guest artist at Chamber Soloists of Detroit, Detroit Chamber Winds and Strings, Anchorage Chamber Music Festival, the Geneva Music Festival and has collaborated with many world’s leading musicians, such as Ralph Votapek, Ani Kavafian and Clive Greensmith. Ran studied violin and viola at Indiana University Jacobs School of Music and Oberlin Conservatory of Music.

Leon Stein (1910-2002) attended DePaul University, where he achieved his MM in 1935 and his Ph.D. in 1949; he studied under Leo Sowerby, Eric DeLamarter, Frederick Stock, and Hans Lange. He taught at DePaul from 1931 to 1978; he was dean of the School of Music there between 1966 and 1976. Stein was also Director of the Graduate Division at De Paul University of Music. College of Jewish Studies, Chicago. He directed a number of Chicago ensembles, including the City Symphony of Chicago. Stein's compositions were modernist in character; his works for saxophone are most widely known. He also wrote on music, particularly Jewish music. His manuscripts are held in the Richardson Library at DePaul.