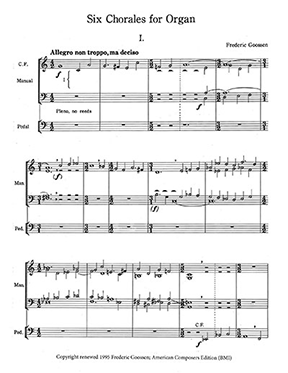 American composer Frederic Goossen (1927–2011) was born in St. Cloud, Minnesota and attended the University of Minnesota (BA and MA). His teachers included Donald Ferguson, James Aliferis (composition), and William Lindsay (piano). Goossen followed this with private study at the Longy School of Music in Cambridge, Massachusetts with Arthur Shepard (composition) and Melville Smith (counterpoint). After teaching at the University of Minnesota and Berea College, Goossen joined the faculty of the University of Alabama where he taught from 1958 until his retirement in 1996. He taught composition and theory and for 25 years was Director of Graduate Studies in Music. For nearly 40 years, Goossen also wrote a weekly column on the fine arts for "The Tuscaloosa News" and had previously served as the newspaper's regular music, art, and theater critic. Goossen composed nearly 150 works in many genres (including seven symphonies for large ensembles that span 1954 to 2001). In 1991, he received a lifetime achievement award from the American Academy of Arts and Letters.

Carson Cooman is an American composer and organist. He holds degrees in music from Harvard University and Carnegie Mellon University and since 2006 has held the position of Composer in Residence at The Memorial Church, Harvard University. As an organ recitalist, Cooman specializes in the performance of contemporary music. Over 300 new compositions by more than 100 international composers have been written for him, and his organ performances can be heard on a number of CD releases and more than 2,400 recordings available online. As a composer, Cooman has created a catalog of works in many forms—ranging from solo instrumental pieces to operas, and from orchestral works to hymn tunes. His work has been performed on all six inhabited continents and appears on over forty recordings, including more than twenty-five complete CDs. For more information, visit carsoncooman.com

Ever since César Franck's three organ "chorales" of 1890 (which are large, single-movement fantasies and use no pre-existing melodies), the term chorale has been used by composers for a very wide range of organ pieces. Frederic Goossen's "Six Chorales for Organ" (1967) would perhaps be more accurately titled chorale preludes, for they hew closely to the model of the baroque chorale prelude, as practiced by every organ composer of that era. Baroque chorale preludes took traditional church melodies as their "cantus firmus". By contrast, Goossen's six pieces use original melodies; however, these  melodies are treated very much in the manner of baroque chorale preludes. In each piece, a different baroque-inspired texture/form is explored. Not only are Goossen's chorale melodies freely-composed, they are also freely-modal, and the harmony of their "accompaniments" is constructed using serial methods. Goossen's approach to serial harmony in the piece is not particularly Germanic (Schoenbergian), but more American: along the lines of the more "open" harmony that one finds in Copland's late serial compositions. His use of serial techniques also does not preclude various tonal and modal moments, especially in terms of cadences. The overall result are pieces that are recognizably "baroque chorale preludes," though with a sound world from American academic music of the 1960s.