From the Dark Tower by Dorothy Rudd Moore - program notes 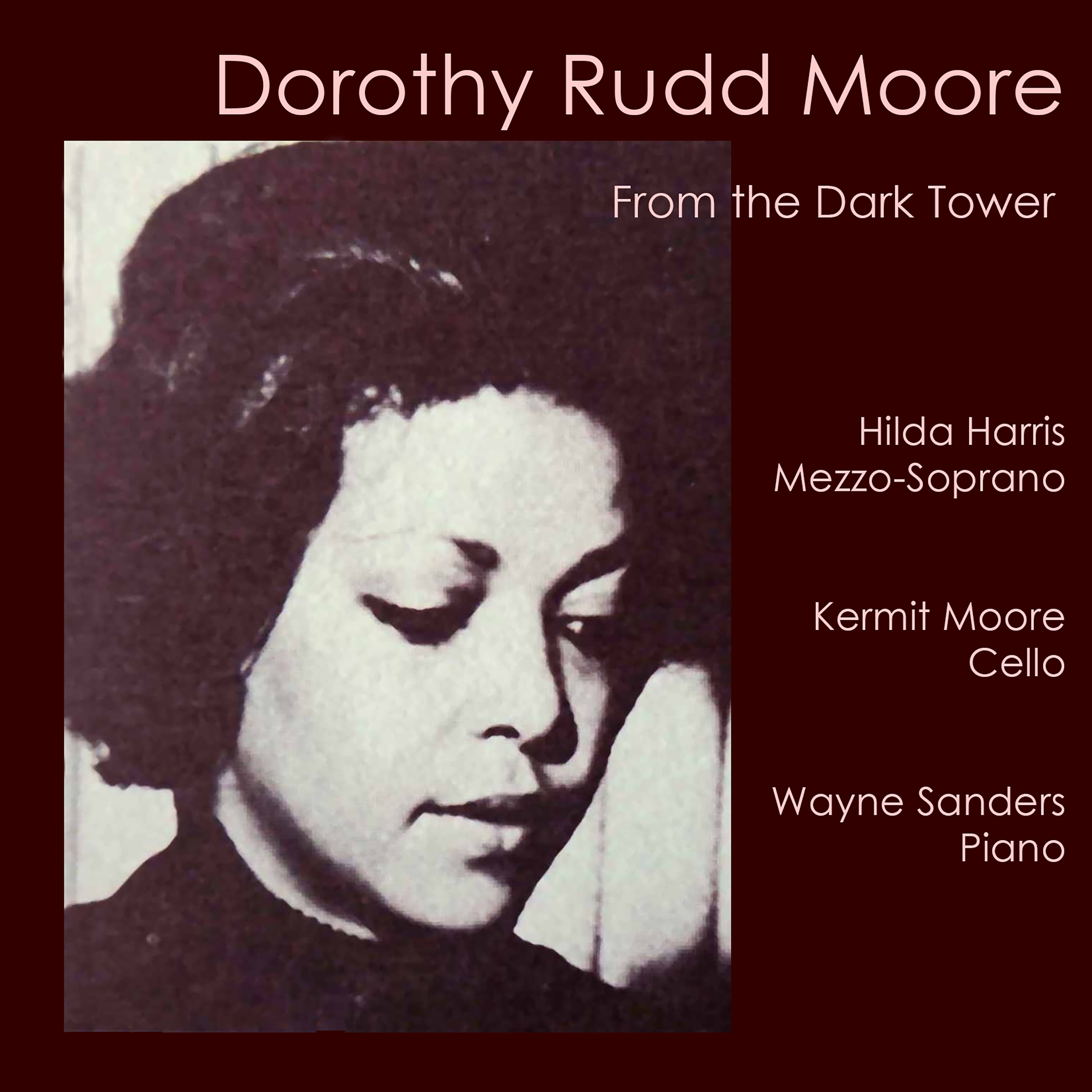 Songs From The Dark Tower (liner notes from Performance Records, 1981)

From the Dark Tower was composed for Hilda Harris in 1970. It was released by Performance Records in 1981.

Mrs. Moore selected the texts for her song cycle From the Dark Tower from the works of Black poets. The composition makes an historically strong declamation of the sensibilities of the Black creative Psyche transplanted to New World soil. Voice, Cello and Piano are the dramatis personae of the piece.

The work begins in a mood of reflective wonderment. The poetry, by James Weldon Johnson, asks the question, “O, Black and unknown Bards of long ago, how came your lips to touch the sacred fire? How, in your darkness did you come to know the pow’r and beauty of the minstrel’s lyre?” The poet, thus is asking, how people so brutally wrenched from their homeland and held in bondage could be the sources of such tender expressions of exquisite, unspoiled beauty. The music, by the use of widely spaced octaves and open intervals, devolves a hollow, timeless aspect.

The second movement, Southern Mansion, text by Arna Bontemps, paints the ironic tableau of the stately southern mansion, framed by immobile, haughty poplars observing two histories at once. That is the spectre of the plantation owner walking with his lady, insouciant, and the anguished slave moving heavily across the land. The music gives the aspect of the figures stalking in their various ways throughout the tableau.

Number three, Willow Bend and Weep, text by Herbert Clark Johnson, has the poet exhorting the Willow Tree to bend down and be aware of his wounds and toil without relief, and then to weep in his behalf, for the poet has no tears left to shed.

Old Black Men (No. 4) uses a text by Georgia Douglas Johnson. The music is graceful and hopeful. Its gentle character bespeaks the dream of old people. As the theme becomes more swashbuckling it emphasizes their broken dreams and finally, again gently, their ability to survive and cope.

No Images (No. 5), poem by Waring Cuny, is a dramatic musical realization of a Black women’s awareness of her attributes. The dominant society had obfuscated her beauty, says the poet. However, if she could dance among palm trees and see her naked reflection in the river, then she would be aware of her beauty. After a sensuous opening melody in the cello, the poet (Voice) makes the first observation. Piano and cello then play drum-like passages, beginning, seemingly from a great distance away, as if from a far-off African village. As they grow nearer, we hear the poet sing of her martyred beauty.

Dream Variation (No. 6) uses a well-known poem by Langston Hughes as the text. The piano plays a harp-like figure as the cello strums pizzicato in accompaniment to the singer telling her dream to dance freely, without burdens, under the sun.

Number 7, For a Poet, has a text by Countee Cullen. The cello seems to recite the poet’s words. The piano enters gently playing silvery intervals, bell-like and punctuated. The voice then offers the poem previously pronounced by the cello: “I have wrapped my dreams in a silken cloth and laid them away in a box of gold.” The placement of the vocal line is a weave interconnecting the piano and cello with great profundity.

The finale (No. 8), sets the poem, From the Dark Tower, by Countee Cullen. Poem and music are masterpieces of worldly awareness and defiance of injustice. The piano states a noble theme, the material of which is used throughout the movement. After having been joined by the cello, the piano drives vigorously into a sharp 5/8 pattern to set the stage for the singer to intone, “We shall not always plant while others reap the golden increment of bursting fruit!”

Dorothy Rudd Moore (b.1940), has received commissions from the National Symphony, Opera Ebony, and the Buffalo Philharmonic, among many solo artists. Considered one of her generation's leading composers of color, her music has been performed and recorded world-wide, and includes chamber pieces, song cycles, orchestral music, and an opera, and is admired for its high level of artistry and its seriousness of purpose.  Other awards she has received include an American Music Center Grant, 1972; New York State Council on the Arts Grant, 1985; and several Meet the Composer grants. Two of her works, Dirge and Deliverance, and Songs From the Dark Tower were released by Performance Records in 1981. In 1985, the world premiere of her opera, Frederick Douglass, took place in New York City.

Moore's parents fully supported her ambitions to be a composer. She studied piano at the Wilmington School of Music and became a student of Harry Andrews. Moore learned to play clarinet so that she could join the all-male band at Howard High. She graduated from Howard University in 1963 where she studied with Dean Warner Lawson, Thomas Kerr, and Mark Fax. She received the Lucy Moten Fellowship to study in France where she continued her studies with Nadia Boulanger in Paris in 1963 and then with Chou Wen-Chung in New York in 1965. In 1968 she became a co-founder of the Society of Black Composers in New York City. As an educator, she has taught voice, piano, and ear training courses at Harlem School of the Arts, 1965-66; New York University, 1969; and Bronx Community College, 1971.

Mezzo-soprano Hilda Harris, formerly a leading artist of the Metropolitan Opera, has performed throughout the United States and Europe. A native of Warrenton, North Carolina, she is known for her portrayals of the "trouser" roles in the mezzo repertoire. She has established herself as a singing actress and has earned critical acclaim in opera, on the concert stage, and in recital. At the Metropolitan Opera, she made her debut as the Student in Lulu and also sang Cherubino (Le nozze di Figaro), the Child (L\'Enfant et les sortilèges), Siebel (Faust), Stephano (Roméo et Juliette), Hansel (Hansel and Gretel), and Sesto (Giulio Cesare). During her extensive career, she has sung such roles as Carmen in St. Gallen, Switzerland; Brussels; and Budapest. In Holland and Belgium she sang the roles of Dorabella (Così fan tutte) and Rosina (Barber of Seville), and the title role in La Cenerentola. She has also sung leading roles with the San Francisco Opera, Lyric Opera of Chicago, New York City Opera, Pittsburgh Opera, Seattle Opera, Spoleto USA, and the Spoleto Festival of Two Worlds in Italy.

Ms. Harris is a member of the Chicago-based Black Music Research Ensemble, whose purpose it is to discover, preserve, promote and perform music of black composers. Her accomplishments have been documented in And So I Sing, by Rosalyn M. Story; Black Women in America, an Historical Encyclopedia, edited by Darlene Clark Hines; The Music of Black Americans by Eileen Southern; and African-American Singers by Patricia Turner. She taught voice at Howard University from 1991 through 1994 and is presently a member of the voice faculties of Sarah Lawrence College and Manhattan School of Music. She maintains a private studio in New York City and is on the voice faculty at the Chautauqua Institution during the summer months.

As a cellist, Kermit Moore (1929-2013) appeared as a soloist and chamber player on some of the world’s leading concert stages. He was renowned for championing the work of 20th-century composers: Where another cellist might present a recital in which a single modern work was interleaved among more traditional fare, Mr. Moore typically offered a half-dozen contemporary pieces at once. Writing in The New York Times in 1969, Peter G. Davis reviewed a program by Mr. Moore at Carnegie Recital Hall that included works by Ben Weber, Iain Hamilton, Roger Sessions, Beatrice Witkin and the African-American composer Hale Smith. “Mr. Moore vaulted every technical hurdle of his formidable recital with disarming ease,” Mr. Davis wrote. “He is a virtuoso cellist, a sensitive musician and something of a hero.”

Mr. Moore also collaborated with jazz musicians, including the pianist McCoy Tyner and the bassist Ron Carter. On the podium, he was a regular guest conductor of the Brooklyn Philharmonic and also led the Detroit Symphony, the Berkeley (Calif.) Symphony and Opera Ebony. Mr. Moore was a founder, the principal cellist, a frequent conductor and an administrator of the Symphony of the New World, an ensemble, begun in New York in 1964, that sought to represent minorities and women in far greater numbers than traditional orchestras did. His recordings include works by Brahms and Mendelssohn as well as those by his wife, composer Dorothy Rudd-Moore. He can also be heard on many jazz and pop albums and, as a member of the Philip Glass Ensemble, the soundtrack for the 1982 film “Koyaanisqatsi.”

Wayne Sanders is co-founder of Opera Ebony and has served as its Musical Director since the company’s inception in 1973. Under his direction, Opera Ebony has gained international prominence-performing in the United States, Europe, South America, Canada and the Caribbean. As vocal coach and accompanist, Mr. Sanders has performed for televised Opera Ebony concerts worldwide and has also appeared at some of the world’s most important music festivals including the Spoleto Festival in Italy and the Savonlinna Festival in Finland. At leading venues such as the Kennedy Center and Carnegie Hall, he has accompanied such superstars as Jessye Norman, Florence Quivar, Kathleen Battle, George Shirley, William Brown, Hilda Harris, Jorma Hynnenin, Benjamin Matthews and Jubiliant Skykes. Mr. Sanders is currently on the voice faculty at Sarah Lawrence College in New York City.