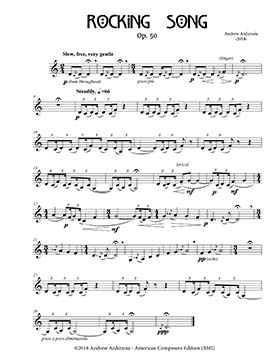 Peter Nelson-King is a multi-instrumentalist and composer from the Seattle area.  After receiving acclaim and honors in high school music fields, he went on to receive brass performance degrees from the University of Puget Sound and Boston University before returning to Seattle.  As a new music performer, he has premiered or helped premiere dozens of works by composers such as Gunther Schuller, Michael Finnissy, Carson Cooman, Joshua Fineberg and many others.  He founded the chamber ensemble Cursive and is a regular player with multiple orchestras and large ensembles in the Seattle area, and has performed his own compositions there and in Boston.

Composer Andrew Ardizzoia (b. 1979) is a native of the San Francisco Bay Area, where he began his studies in music at an early age. His music, described as “exuberant, rhythmic, and great fun,” as well as “smart, intriguing, and masterful,” has been performed four continents by a wide spectrum of soloists and ensembles.

Composer's note:
Rocking Song was inspired by a project that I assigned to my first year composition students: compose a wordless, unaccompanied lullaby for a single voice. As I thought about how I’d approach that challenge, I remembered a short lilting figure my grandmother would hum to me while rocking me as a very small child. I started with that three note figure and wrote my own lullaby to share with my students.