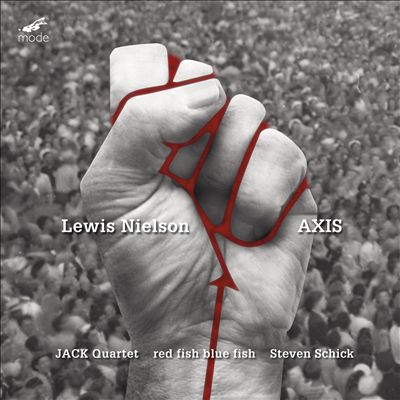 Composer Lewis Nielson has released a new CD of music on Mode Records, titled Axis. The works and performers on this release are as follows:

Stephen Brookes from the Washington Post describes Nielson’s 2010 quartet Le journal du corps as music that “almost whispered, drawn in quiet gestures that echoed the human agonies it explored and coalesced finally into an exalting movement that had the grace of a communal prayer. In short, a work of serene dignity and subtle emotional power, as spiritual as it was political.”

In the liner notes for this CD, author Michael Gallope states: “Each (work) remains militantly faithful to the bleak and quiet negativity one might associate with European composers like Helmut Lachenmann or Salvatore Sciarrino, while forging a distinctive approach to form that is at once lyrical, sensitive, and somehow picturesque. Close listening often reveals a tense and occasionally gripping sense of control over a vastly detailed landscape, with certain fragments and short episodes positioned quite unexpectedly, in ways that invite interpretive scrutiny. An array of referents comes to mind: broken toys, alien objects, twisted wires, dancing animals, sacred choral meditations, the magical clang of rituals. Indeed, Nielson’s sound world is a strange landscape of objects and events that are often vividly pictorial. They unfold in a vast empty space; unlike some of the composer’s earlier works, there are few hints of narrative or transformation.”

More information on this recording (including purchasing info) may be found at this link.

Excerpt from the CD Axis on Mode Records: Tocsin for six percussionists, performed by the Red Fish Blue Fish Ensemble