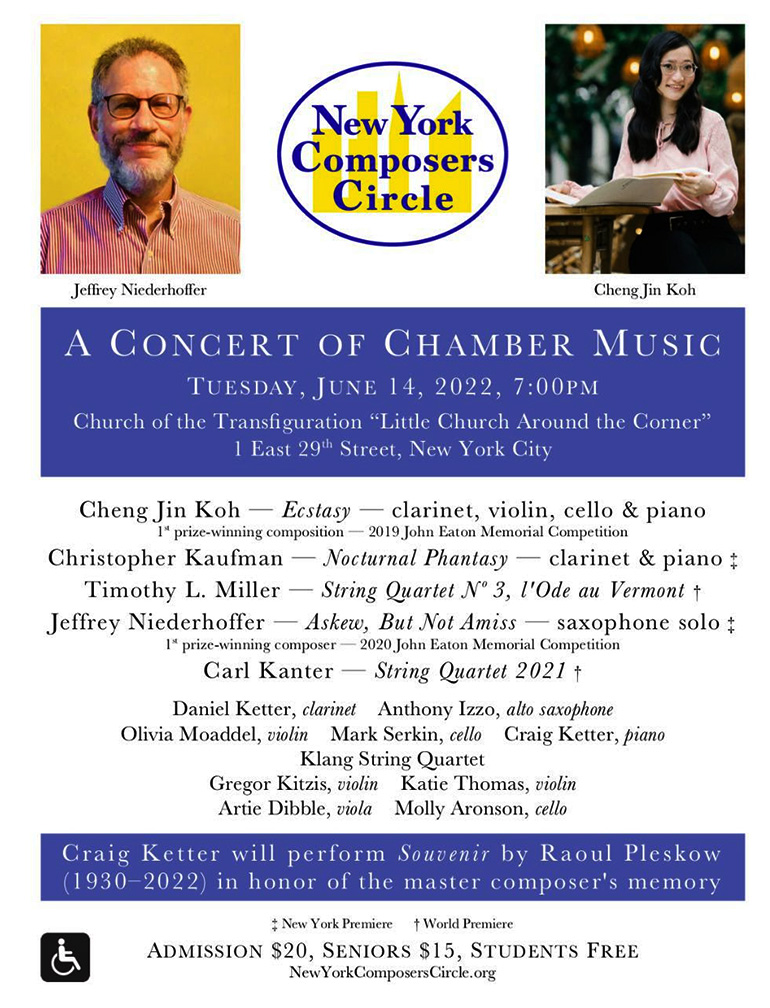 Tuesday, June 14 | 7:00 PM, A CONCERT OF NEW MUSIC will feature premiere performances of string quartets by Timothy Miller and Carl Kanter, a saxophone solo by Jeffrey Niederhoffer, a work for clarinet and piano by Christopher Kaufman, and the winning work of the 2019 John Eaton Memorial Competition by Cheng-Jin Koh, and more. The concert will be LIVE at Church of the Transfiguration at 1 E. 29th St. in Manhattan, and also Livestreamed on YouTube. Please click HERE to be directed to the channel.

Pianist Craig Ketter will also perform a work by Raoul Pleskow in homage to this wonderful composer we have lost.

Raoul Pleskow (October 12, 1930 - May 18, 2022) was an Honorary Member of American Composers Alliance and New York Composers Circle.
He was born October 12, 1930 in Vienna, Austria. He immigrated to the United States in 1939 and became a naturalized citizen in 1945. From 1950 to 1952 he attended the Julliard School of Music in New york City. In 1956 he, graduated from Queens College, where he studied composition with Karol Rathaus, earning a Bachelor of Music (BM). In 1958 he earned a Masters degree in Music (MM) at Columbia University where he studied composition with Otto Luening. In 1959 he joined the faculty of the department of music at C. W. Post College of Long Island University. There he worked together with Stefan Wolpe, then chairman of the department. Pleskow became chairman of the department of music and in 1970 became full professor; he is now retired from teaching and is composer in residence at C. W. Post College.