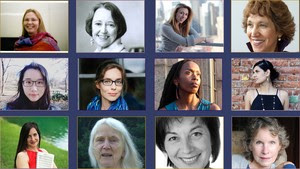 This event was scheduled to take place March 16 marking Women History Month.  Regrettably, the COVID19 pandemic forced it to be re-scheduled.

The following works and composers will be featured:

Active as pianist and composer, Max Lifchitz has appeared as soloist with among others, the Albany Symphony Orchestra, the Sheboygan Symphony, México’s National Symphony Orchestra and the Neuchatel Orchestra in Switzerland. The San Francisco Chronicle described him as "a composer of brilliant imagination and a stunning, ultra-sensitive pianist" while the New York praised commented on his "clean, measured and sensitive performances." He is the director of the New York City based North/South Chamber Orchestra now celebrating its 40th consecutive season. His numerous recordings are widely available through iTunes, Spotify, Amazon, YouTube and most other music streaming services.

The event is made possible in part with public funds from the New York State Council on the Arts; a grant from the Women's Philharmonic Advocacy; and a Seed Money Grant from New York Women Composers, Inc.