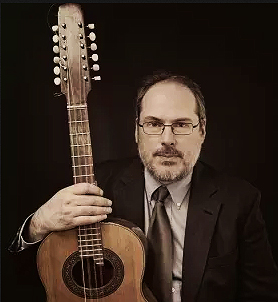 Distinguished guitarist William Anderson will premiere Delusional? by Richard Cameron-Wolfe on September 11 at Lithuania’s cutting-edge three-day microtonal music festival, organized by Ruta Staneviciute and others. Cameron-Wolfe’s new guitar solo is composed in 8th-tones, with five of the instrument’s six strings re-tuned to create a 48-tone sonic environment. The concert will be held in the Concert Hall of the Franciscan Monastery in Vilnius at 5:00PM (10:00 AM-ET). The concert will not be streamed, but audio recordings of the festival will be made available thereafter. Program book online here.

Guitarist Anderson has performed with New York's finest ensembles, including the New York Philharmonic, the Chamber Music Society of Lincoln Center, the Metropolitan Opera Chamber Players, Sequitur, the Group for Contemporary Music, and the Da Capo Chamber Players, among others.