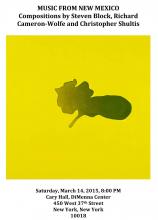 Advance Tickets are $10 each and can be purchased here:
http://newmexicocomposers.brownpapertickets.com

Steven Block (b.1952, NYC) has appeared in the various personae of composer, music theorist,
music critic, pianist, classical radio and disco deejay, mediator, and college-level administrator,
among others. He chairs the Department of Music at the University of New Mexico. Block has
studied with some of the most innovative composers and theorists in the world including David
Stock, Robert Morris, A. Wayne Slawson, and Franco Donatoni. His compositions have been
performed worldwide including performances in Sydney, Paris and Poland. His orchestral
work, Shadows, has been rereleased on Navona Records and a chamber work, FireTiger for
violin and piano, has also been released on Parma Recordings.

Richard Cameron-Wolfe studied at Oberlin College and Indiana University – composition with
Bernhard Heiden, Iannis Xenakis, and John Eaton; piano with Joseph Battista and Menahem
Pressler. In 1974, he taught for a year at the University of Wisconsin-Milwaukee, and then moved
to New York City, catalyzed by an invitation from the Jose Limon Dance Company. From 1978
to 2002, he taught in the music and dance departments at Purchase College-SUNY, after which he
relocated to the mountains of northern New Mexico. Cameron-Wolfe has recorded two CDs on
the Furious Artisans label: Paris X (as pianist) and Burning Questions (as composer). His piano
performances also appear in three compilation CDs on the British LTM label. He has just
returned from Eastern Europe, where concerts of his music were performed on February 14, 21,
and 28 – in St. Petersburg, Moscow, and Kharkov (Ukraine). The four works on this concert will
appear on his forthcoming CD, An Inventory of Damaged Goods.

Composer and writer Christopher Shultis, Distinguished Professor Emeritus at the University of
New Mexico, has followed his passion for things experimental from his earliest years as a wellknown
percussionist and conductor. An internationally recognized John Cage scholar, his earliest
compositions (one of which is part of this evening’s concert) were influenced by the instruction
based scores of the New York School and Fluxus composers. In the mid-1990s, his composing
shifted to fully notated works following a sense that experimental music had fallen victim to the
same clichés it was meant to resist. Beginning in the wooded trails of Germany and continuing in
the mountain wilderness of New Mexico, Shultis found a new direction while taking long walks
in mountains and woods. Most of those compositions (1995-2009) can be heard on his recent CD,
Devisadero: Music from the New Mexico Wilderness (Navona Recordings).