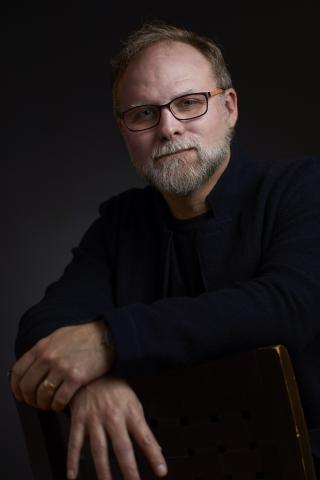 Scott L. Miller is an American composer described as ‘a true force on the avant-ambient scene’ of ‘high adventure avant garde music of the best sort’ (Classical-Modern Music Review). Best known for his electroacoustic chamber music and ecosystemic performance pieces, his music is characterized by collaborative approaches to composition and the use of electronics, exploring performer/computer improvisation and re-imagining ancient compositional processes through the lens of 21st century technology.

His recent work experiments with VR applications in live concerts, first realized in his composition Raba, created for Tallinn-based Ensemble U:. In 2019, Miller released The Blue in the Distance, a 360º Virtual Reality film featuring his sonically immersive, classical ambient style. The film explores Quarry Park Reserve in Waite Park, MN. Since spring of 2020, he has become an active producer of telematic music, using specialized software and home-quality internet to produce live concerts and commercial recordings while socially distanced with musicians and audiences at home rather than in the concert hall. He is currently working producing monthly webisodes commissioned by his long-time collaborators, the new music ensemble Zeitgeist, in a series of works collectively titled COINCIDENT. These are rehearsed and recorded telematically and feature collaborations with live installation video artists (Carole Kim), spoken-word artists (Joe Horton), and members of Cleveland-based ensemble No Exit.

Three time McKnight Composer Fellow, his work is frequently performed by soloists, ensembles, and at festivals throughout North America and Europe. Recordings of his music are available on New Focus Recordings, Innova, and other labels. His music is published by the American Composers Alliance, Tetractys, and Jeanné. His most recent albums are Ghost Layers: TAK Performs Miller (FCR253) and 05 IX (RR006), recorded telematically with the UK-based ensemble rarescale.

Miller is a Professor of Music at St. Cloud State University, Minnesota, where he teaches composition, electroacoustic music and theory. He is Past-President (2014—18) of the Society for Electro-Acoustic Music in the U.S. (SEAMUS) and presently Director of SEAMUS Records.

Published by the composer: