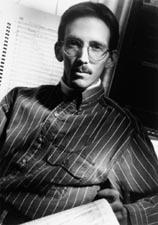 Lee Gannon (1960-1996) was a prize-winning composer who wrote in an accessible, eclectic style. He died from injuries in a car accident on Sept. 2, 1996 in Nashville at the age of 36. Mr. Gannon composed prolifically for voice, solo instruments, chamber ensembles and orchestra, and had works performed in recent years by the American Composers Orchestra, the Civic Orchestra of Chicago, the Pittsburgh New Music Ensemble and the Nashville Symphony.

Many of his works were about his struggle with H.I.V., the virus that causes AIDS, and in some of his works he showed the virus being conquered by innocence or fortitude.

In "The Time Was Gold," for example, a harsh clarinet line representing the virus was vanquished by a toy piano. In "Derelict," the purity of a flute line was the victorious force. Another of his works, "Triad-O-Rama," a wind quintet in a Neo-Classical style, was included on "Memento Bittersweet," a collection of works by composers with AIDS released by Catalyst in 1994.

He was born in Nashville and studied piano, flute and composition at the Eastman School of Music in Rochester, N.Y. His composition teachers included Samuel Adler, Claude Baker, Robert Morris and Joseph Schwantner. He studied with Dan Welcher at the University of Texas, where he completed his master's degree in 1990. Mr. Gannon was awarded the Charles Ives Prize by the American Academy of Arts and Letters in 1993. --Allan Kozinn, New York Times

*Many works by Lee Gannon are available and distributed by the American Composers Alliance, in coopoeration with the composer's estate. Please contact ACA for availability and prices.