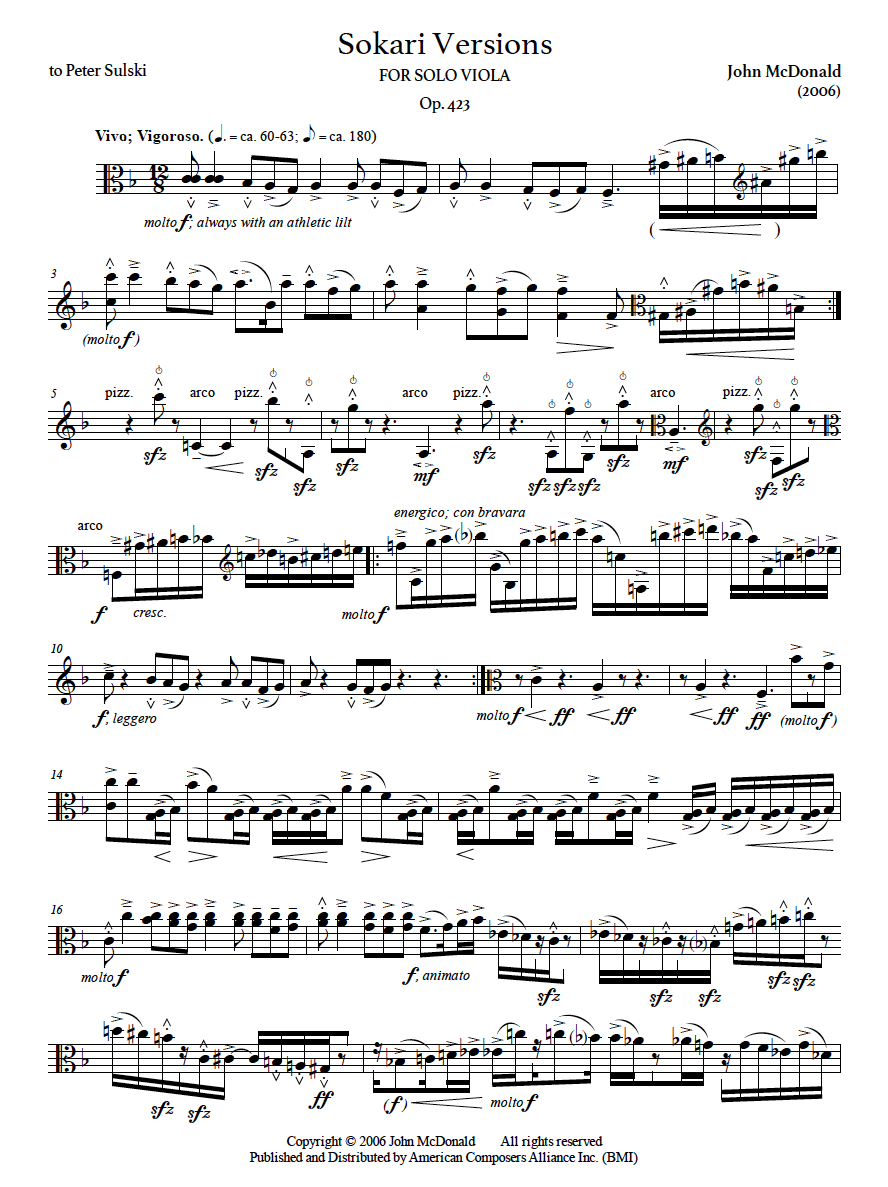 Composed in May and July of 2006, this viola solo takes its inspiration from “Sokari,” one of Sri Lanka’s earliest traditional inland folk plays. The one short melody associated with the folk drama is the central material of the piece, transcribed and varied from the snippet of music printed in Chapter 5 of E.R. Sarachchandra’s The Folk Drama of Ceylon. There are many versions of the Sokari story, but in all its varieties it is performed as a masked mime with much burlesque, “witty dialogue,” and “rough humour.”

As the story unfolds of the beautiful but barren young woman Sokari, who has come from India to Ceylon with her husband, we find that as her husband encounters difficulties acclimating to a new language (Sinhalese) and surroundings, he is bitten by a dog and becomes ill. A doctor is summoned to help him, and in the process of treating him ends up eloping with Sokari. After much grief and many detailed scenes, Sokari is found and she and her husband are reconciled; she gives birth to a child, in some versions by the doctor, in some by the husband. Important is that the theme of a “barren woman being brought to bear a child” indicates that the drama is intended to encourage fertility and prosperity in agriculture.

To me, the reconciliation of Sokari and her husband can also be seen as a wish for reconciliation in the by now two-decade civil conflict between the Tamil Tigers (LTTE) and the Sri Lankan government.

This viola solo presents many variants or “versions” of the two-bar melody, to which actors in the drama dance with an unsystematic lilt (i.e. they “jump up and down”). A slow lament (performed distantly, with the practice mute) appears near the end of the piece, musing on the profound difficulties mentioned above. But the “Sokari” tune reappears, indicating that the longed-for reconciliation of wife with husband and citizens with homeland will indeed take place.

Many thanks go to Peter Sulski for encouraging me to provide solo viola literature for his recitals. After leafing through some earlier attempts at viola compositions, I was moved to try anew. “Sokari Variations” is the result.

Included in the collection Showpieces for Solo Viola.