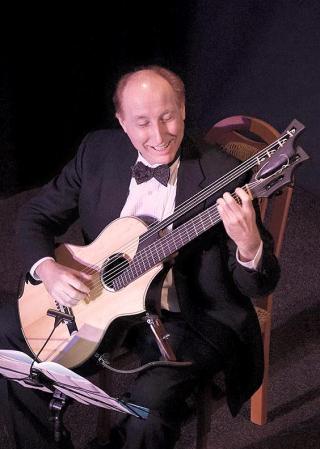 February 3 at 8 pm and Sunday, April 29 at 7:30 pm Location: 1867 Sanctuary Arts and Culture Center, in Ewing, New Jersey, is a large stone building located at 101 Scotch Road, Ewing, NJ 08628.  Parking is free and located across Scotch Road just north of the Sanctuary.

Classical Guitarist Stanley Alexandrowicz is internationally renowned for his thrilling virtuosity, poetic interpretations, and refined musicality. In addition to his command of the instrument’s standard repertoire, he has premiered and commissioned over 100 works by composers from Europe, Asia, the United States, Cuba, and Latin America.A scholar and specialist in the field of 19th Century music, he often features unknown compositions by the Romantic guitar composer-virtuosi, playing on period instruments and revitalizing works which have lain dormant (often in manuscript form) for over a century. He has given lecture-recitals internationally on both Romantic and Contemporary music, including the Institute for Advanced Study (Princeton – USA), the International Guitar Research Centre (University of Surrey – UK), the Baltimore Museum of Art (USA), and, the Harp-Guitar Foundation of America.