The Three Truths
Music and Libretto by Matthew Welch

Reinaldo Moya is a Venezuelan American composer whose music is inspired by the complex and boundless canvases of the great Latin American novels. His music can be thought of as folk music from the magical, imaginary landscapes depicted in these books. Seemingly opposite aspects of reality coexist in his music: the simple and the complex, the familiar and the unexpected, the beautiful and the ugly, the magical and the everyday. He has always been surrounded by music. Growing up in Venezuela as the youngest of three musical sons, he got exposed to music early and often. He began his musical journey as a violinist, and even as a young boy he enjoyed making up little songs and ditties. It must be admitted, however that he was no Mozart. As a violinist, he was a founding member of the Simón Bolívar Orchestra of Venezuela, and travelled extensively playing throughout Latin America, the United States and Europe. He started composing more seriously as an undergraduate at West Virginia University under the guidance of John Beall. He later studied at the Juilliard School with Samuel Adler and Robert Beaser. His music has been performed by the Da Capo Chamber Players, The Juilliard Orchestra, the Attacca Quartet, Trio 180, and musicians from the JACK Quartet and Alarm Will Sound. Reinaldo lives in Minnesota with his violinist wife Francesca Anderegg, and they both teach music at St. Olaf College. In the summers, Reinaldo is on the composition faculty of the Interlochen Arts Camp, a job he enjoys as he gets to share his love and passion for music with younger composers. 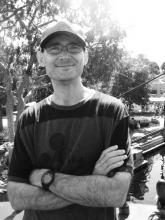 Mark Thome is a composer, arranger and orchestrator who resides in the Pacific Northwest of Washington State. He received his Bachelor of Arts degree at the Evergreen State College. An accomplished clarinet and saxophone player, Mark has performed with numerous groups including the Tacoma Symphony, Tacoma Concert Band, the Jazz Senators big band, Native Blue jazz sextet, Barnum and Bailey Circus and in the pit of many musicals. He has composed and arranged for a variety of performing groups ranging from jazz combos, jazz ensembles, concert band to chamber ensembles, full orchestra and opera. Mark currently has compositions and arrangements published with UNC Jazz Press, Walrus Music Publishing as well as the American Composers Alliance and was a prizewinner in the 2009 Humboldt State University Brass Chamber Music Workshop Composition Competition.  Mark is staff arranger for Student Orchestras of Greater Olympia and is currently working as the arranger for "Clarinet Monsters", an orchestral crossover experience that blends classical and jazz featuring clarinetist Jeff Brooks with symphony orchestra and jazz quartet. Included in the "Clarinet Monsters" program will be the music of Benny Goodman, Artie Shaw and Jeff Brooks.

Matthew WelchRegarded as “a composer possessed of both rich imagination and the skill to bring his fancies to life” by Time Out New York, composer and bagpipe virtuoso Matthew Welch holds two degrees in Music Composition, a BFA from Simon Fraser University (1999), and an MA from Wesleyan University (2001), having studied with noted composers such as Barry Truax, Rodney Sharman, Alvin Lucier and Anthony Braxton. After locating to New York City in 2001, he has worked with a host of other artists such as John Zorn, Julia Wolfe, Zeena Parkins, and Ikue Mori. The eclectic breadth of his interests in Scottish bagpipe music, Balinese gamelan, minimalism, improvisation and rock converge in compositional amalgams ranging from traditional-like bagpipe tunes to electronic pieces, improvisation strategies and fully notated works for solo instruments, chamber ensembles, orchestra and non-western instruments. Since 2002, Mr. Welch has been running and composing for his own eclectic ensemble, Blarvuster, whose repertoire the New York Times has claimed as “border-busting music; original and catchy.” Mr. Welch has recorded for the Tzadik, Mode, Cantaloupe, Leo, Porter, Muud, Avian, Newsonic and Parallactic record labels.


The story of Generalissimo revolves around the darkly twisted logic of a Latin American dictator who seizes power at the expense of others. Is he a charismatic hero or a murdering tyrant? The lead character, Miguel Angel, confronts himself in a series of flashbacks on his tormented life. The lush musical score of Reinaldo Moya will be performed by Ensemble 20-21 with special guest singers Douglas Williams, Michael Kelly, Mary Mackenzie, and Solange Merdinian, with percussionist Samuel Budish.

SHE: AN OPERA OF ADVENTURE.
Music by Mark Thome
Libretto by Rex Stewart and Blair Stewart
Based on the novel She: A History of Adventure by H. Rider Haggard
World Premiere performance
Scenes from She

She, subtitled A History of Adventure, is a novel by Henry Rider Haggard, first serialized in The Graphic magazine from October 1886 to January 1887. She is one of the classics of imaginative literature, with over 83 million copies sold in 44 different languages--one of the best-selling books of all time. The story follows the journey of Horace Holly and his assistant Leo Vincey to a lost kingdom in Africa. There, they encounter an ancient community and its mysterious "white queen," Ayesha. Librettists Rex and Blair Stewart have followed the author's development of the "Lost World" sub-genre, to accompany the composers intimate chamber score. Veteran theater and opera performers Blake Friedman and Nicole Pantos are accompanied by the NY Times-acclaimed Lost Dog New Music Ensemble.

Matthew Welch's The Three Truths is an operatic setting based on a Sufi parable, in which a robot and a cyborg discuss the human capacity for truth. It was performed to a sold out hall at Issue Project Room in February. In this performance, soprano Anne Rhodes will reprise her magnificent performance in Welch's dramatic scene, in which she portrays the robot tyrant, RX-1. Welch's music presents an unusual blend-Indonesian gamelan, Scottish bagpipes, and indie rock. Welch has found his compositional voice in their common ground.

This concert is supported by New Music USA, thee Alice M. Ditson Fund, the Aaron Copland Fund for Music, and Experiments in Opera. Composers will be on hand for discussion after the concert, and librettist Rex Stewart will attend the festivities, courtesy of Asia University in Tokyo.