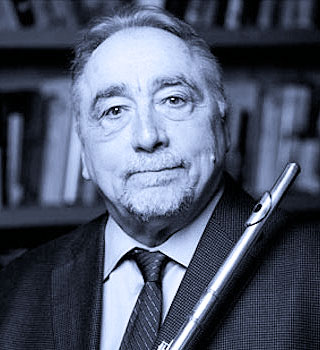 Harvey Sollberger is a composer, conductor and flutist who has been active in many world musical centers. He was born in Cedar Rapids, Iowa, in 1938, and holds degrees from the University of Iowa and Columbia University. Performers of his music have included Pierre Boulez, Gunther Schuller, Bruno Maderna, the New York Philharmonic, the San Francisco Symphony, Tanglewood, and a wide array of contemporary music ensembles and international festivals. Sollberger has received support in the form of the Award of the American Institute of Arts and Letters, two Guggenheim Fellowships, and various commissions (Koussevitzky, Naumberg, Fromm, NEA). He co-founded the Group for Contemporary Music in 1962, and subsequently led new music ensembles at the Manhattan School of Music, Indiana University and the University of California, San Diego in addition to being Music Director of the La Jolla Symphony and Chorus from 1997 to 2005. As a performer he has given premieres of works by Babbitt, Carter, Davidovsky, Felder, Martino, Perle, Reynolds and Wuorinen, and the American premieres of music by Feldman, Holler, Risset, Scelsi, Schnittke, Stockhausen, Tiensuu and Xenakis.