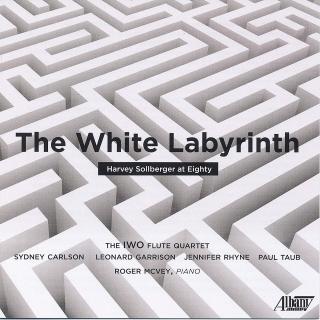 The six American Composers Alliance (BMI) published works on this disc were composed over a 57-year span from 1958 to 2015. They present a series of snapshots of composer Harvey Sollberger's compositional concerns through the medium of the flute. In the 35 compositions that feature the flute, these six can be thought of as the plums, but are not the only ones by any means. Harvey Sollberger, now 80 years old, has had a distinguished career as a composer, flutist, and conductor. He co-founded the Group for Contemporary Music, the first contemporary music ensemble in residence at an American university. His music has been performed throughout the world, his discography now tops 150 commercial releases and he has taught at Columbia, the Manhattan School of Music, the Indiana University School of Music and the University of California, San Diego. The IWO Flute Quartet, named after its members' home states of Idaho, Washington, and Oregon, was formed in 2011 by four leading Pacific Northwest flutists. Each member (Sydney Carlson, Leonard Garrison, Jennifer Rhyne, and Paul Taub) are advocates for contemporary music and enjoy significant careers as performers and educators.

Disk available from Albany and other online retailers and streaming services.