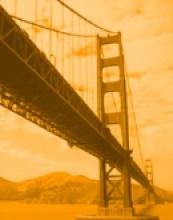 American Opera Projects and LivelyWorks present a workshop production of THE GOLDEN GATE, an opera in two acts.

Music by Conrad Cummings Libretto from the novel-in-verse by Vikram Seth adapted by the composer.

The Golden Gate charts two years in the tightly intertwined
lives of five young, attractive, and complex characters. In their
early- and mid-twenties, each is dealing with the intoxicating and
disorienting openness of possibilities presented by San Francisco in
the early 1980s. Inspired by Pushkin’s Eugene Onegin, Seth’s novel-in-verse follows Pushkin’s themes while moving its verse and its story into a poignantly modern setting.