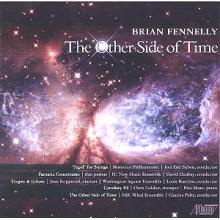 August New Releases from Albany Records include a new all-ACA CD (TROY 1350) of music by Brian Fennelly, including: Sigol for Strings, Fantasia Concertante, Tropes and Echoes, Corollary III, and The Other Side of Time.

The five varied compositions presented on this CD provide a concise portrait of Brian Fennelly's compositional practice. They are arranged to begin with string orchestra, move through combinations with soloists, and end with wind orchestra. Brian Fennelly (b.1937) studied at Yale where he was the first student to earn a degree in the newly created Ph.D. program in music theory. From then until 1997 he was Professor of Music at New York University. His numerous awards include fellowships from the Guggenheim Foundation and the National Endowment for the Arts, commissions from the Koussevitzky and Fromm Foundations and composer residencies at the Rockefeller Foundation Center and a lifetime achievement award from the American Academy of Arts and Letters. His catalog includes works for orchestra, chamber ensembles and solo instruments as well as choral, solo song and electronic titles.

Also available from Amazon and other CD retailers. The composer's new work for violin and piano, "Kythera Variations" will be premiered at the Tenri Cultural Center in New York City on October 20th.