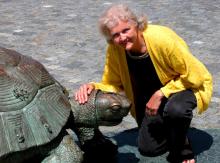 The Sunday afternoon program (4
pm) includes a choral work by Harold Stover, a new violin-horn-piano trio trio
by Gia Comol (with John Boden of the PSO as
one of the players), Dalit Warshaw playing her own piano music, a brand-new
piece by Peter McLaughlin (with Peter, Josh, and Abriel Ferreira among the performers),
and a new work by Elizabeth Austin for piano and recorded  sounds (honoring the Chopin and
Schumann 2010 bicentennial years) played by pianist, Katie Cushing. The
Conservatory is located in the Woodfords Church, 20 Woodford Street.

On Sunday April 17, the festival will also feature "Round Robin" by Elliott Schwartz; Gregory Hall's "Mysteria" will attempt to revive the lost art of
classical piano improvisation; and Philip Carlsen's "October," to be played by his son, Melsen, "(calls) attention to the inherent
out-of-tuneness of Western equal temperament. Composer and clarinetist Beth Wiemann, and Anatol Wieck, viola will perform "Crows Everywhere are Equally Black" with video projections.