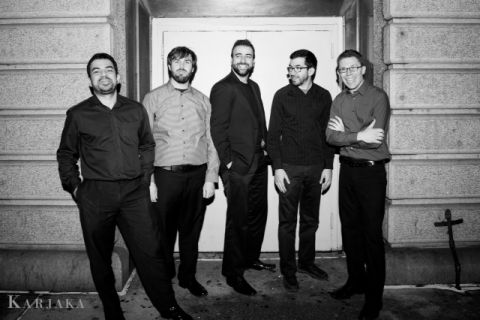 The final concert of the season for the Firehouse New Music Series that is hosted by Iktus Percussion, ACA Presents music from American Composers Edition, including works by Robert Carl, Alice Shields, Scott L. Miller, Lewis Nielson,  Christopher Shultis, Richard McCandless, and Daniel Tacke.  The Firehouse Space, at 246 Frost Street in Brooklyn, is close to the Graham Avenue subway stop on the L line.

Based in New York City, Iktus Percussion is an ambitious, dynamic young ensemble committed to expanding the boundaries of the percussion genre. Iktus is a collective-based operation, featuring an array of industrious and multi-talented percussionists with Chris Graham, Justin Wolf, Josh Perry, Sean Statser, and Piero Guimaraes at the core. Pianist Julia Den Boer will join the ensemble for this concert. As a group with strong ties to the local artistic community, Iktus is dedicated to collaboration with emerging composers, having commissioned over fifty new works for percussion.

“...the members of Iktus Percussion...played with a sense of ensemble that is not to be rivaled. The performance was fearless and flawless, with some of the most exciting playing I have ever heard.”
- Sequenza 21

Iktus was selected as a Time Out New York Critic’s Pick: Top Ten Concert of the Year in 2010, received critical acclaim from the New York Times for their performance with the St. Petersburg Chamber Symphony in the “Wall to Wall” series: Music of the Soviet ERA and a concert of selected works of John Cage at Le Poisson Rouge, and sold out the final evening of the 2012 Gaudeamus Muziek week at Issue Project Room. Iktus is endorsed by Vic Firth and Black Swamp Percussion.