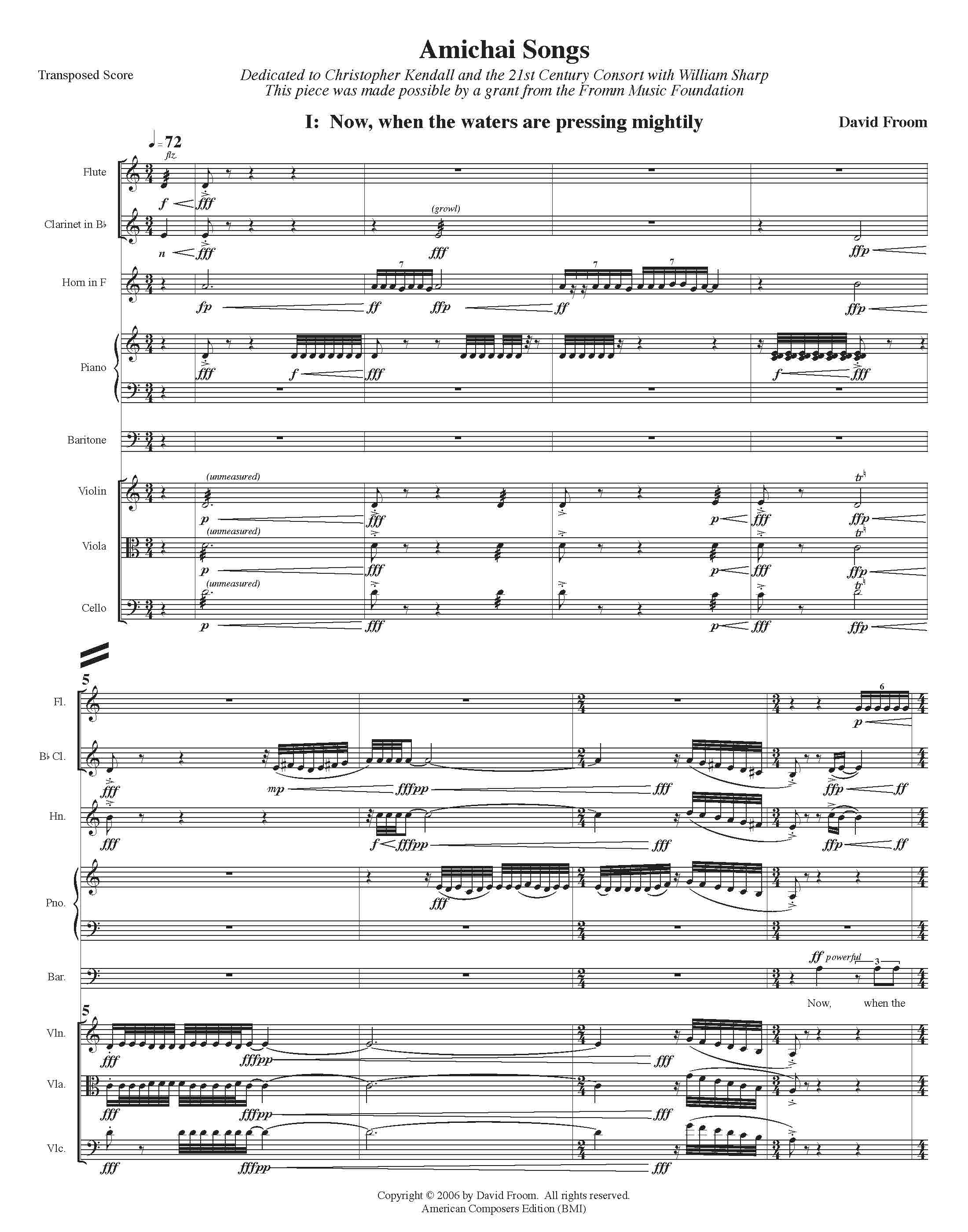 Year Authored (or revised)
Duration (min)
13
Movements
Now, when the waters are pressing mightily
In a man's life
The House of Lovers

Composer David Froom avows a tension between his Jewish heritage and his desire to lead a secular, post-theological life. It is a struggle he examined with his teachers Mario Davidovsky and Alexander Goehr. He also feels connected to Gustav Mahler and Arnold Schoenberg through their conflicted experiences as Austrian Jews. Judaism presents a tangle of religion and ethnic identity in which it seems impossible to reject one without rejecting the other. If this is the source of Froom’s tension, it could also be the source of a gusher of creative artifacts that permeate every aspect of contemporary Western culture.

Perhaps no one has embodied this more than Israeli poet Yehuda Amichai. His poetry is fiercely secular yet written in the language of the Old Testament. Indeed, Amichai was undoubtedly a key contributor to the renaissance of Hebrew, having written at a time when the language was taking its first baby-steps towards revival. Nevertheless, his poetry is widely translated, and Froom has selected three riveting translations in English by Leon Wieseltier.

“Amichai Songs” was commissioned by the Fromm Foundation for baritone William Sharp and scored for flute, clarinet, horn, piano, violin, viola, and cello. (Froom has also arranged a subsequent version for orchestra.) The horn adds an element of heroism to this otherwise typical contemporary ensemble. In particular, the first movement (a paean to the arrival of Spring) evokes the swagger of Mahler’s opening to Das Lied von der Erde. The other movements are a contemplative reverie on the nature of life and an intimate portrayal of love. The piece ends quietly with an arresting shift from E-flat to A-flat in the final bars.

While the piano often shows its percussive side, the other instruments are treated lyrically, rarely venturing into extremes of range or technique. The horn part sings primarily in the meat of its register, with an occasional meander below written G3 but mostly content to lie comfortably between G3 and G5. One can imagine the composer chose this approach so as to allow the singer to be prominent, but it also leaves an overall gentle impact that befits the poetry.  -- Robert G. Patterson

Commissioned by the Fromm Foundation at Harvard for William Sharp and the 21st Century Consort.