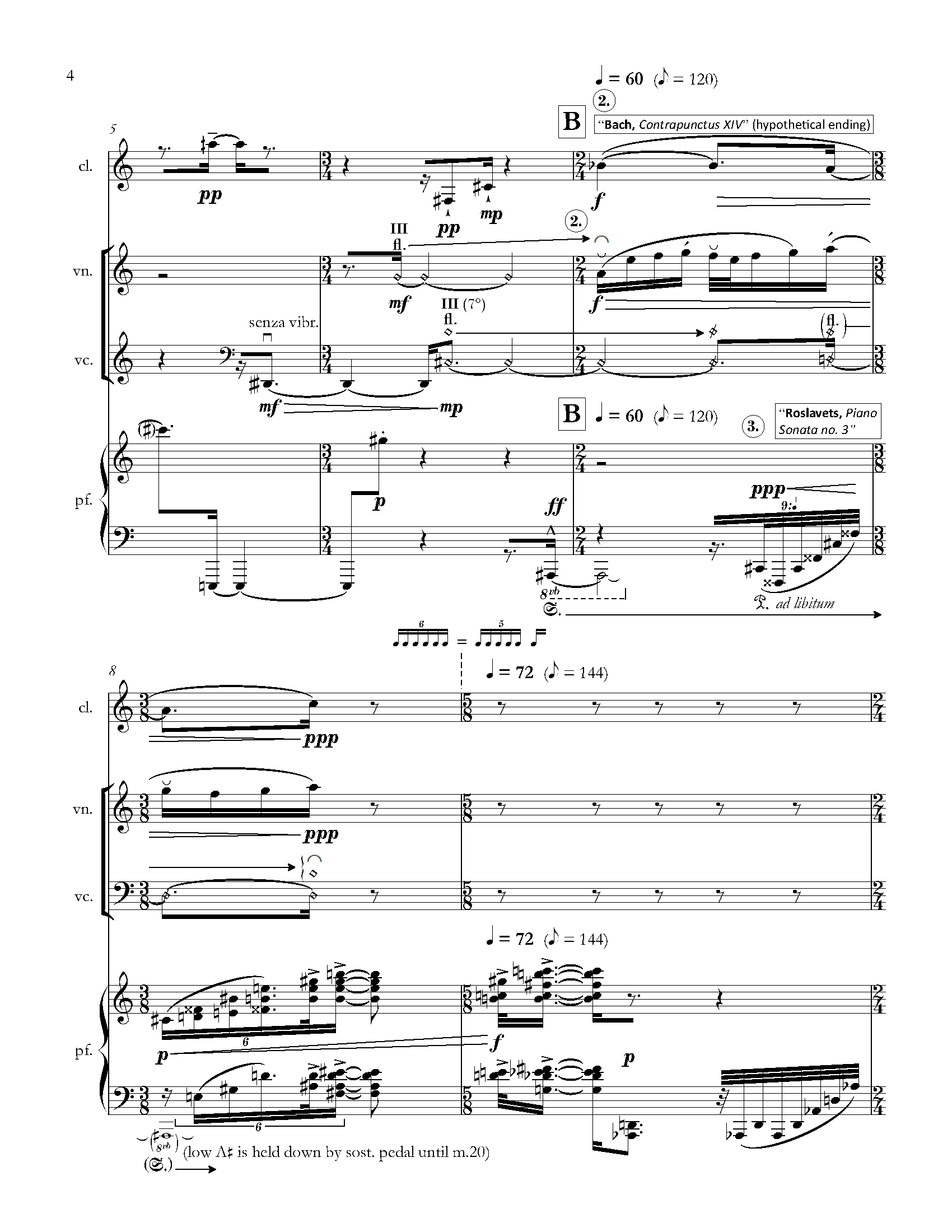 The piece is constructed out of fragments of three “lost pieces”: Nikolai Roslavet's Piano Sonata no. 3, the ending of J.S. Bach's Art of Fugue, and Julius Eastman's Buddha. The first two of these are hypothetical impressions of what they would sound like. Roslavets belonged to the heady days of Russian Futurism in the 1920’s Soviet Union, which sought to abandon old traditions and create an entirely new artistic language. His third and fourth piano sonatas are lost. The Bach “excerpt” would belong to Contrapunctus XIV, the unfinished last fugue in The Art of Fugue that would have climaxed in the unbroken cycling of four themes in four voices. Eastman's Buddha is one his last pieces, composed while homeless. Although it is a real piece, its strangely laid out score is difficult to interpret, as he left no performance instructions. A discordant, serial “machine music” interrupts the collage of these pieces, along with sketches from an old piece (from the composer) as a “bystander”.

The title refers to concept of the “slow cancellation of the future” in the writings of Franco Berardi and Mark Fisher. This is the shrinking ability of culture to create new ideas—that is, outside the hegemony of capital—beginning in the 1980’s. Without the feeling that a better world (or “future”) than ours is even thinkable, much less within our reach, the same ideas will be retread over and over, resembling the output of a procedural generation algorithm, code in a machine that holds up extreme inequality.

The three lost pieces symbolise aspects of humanity that are “killed” by the grinding machine. Roslavets represents the ending of “the era in which people trusted in the future”—the concept of “future”, widely held as late as 1977, as an evermarching “progress” towards a better world. Bach represents the idea of the past or “tradition”, painted as a towering master of the most intricate baroque masterpieces, but now played on repeat in Port Authority Bus Terminal to instill fear in the homeless. Eastman represents the consequences of the previous two losses. Left without the future and thrown away by the dominant culture’s artistic scene, the debased human life is ground to dust.

Instrumentalists must speak during performance.