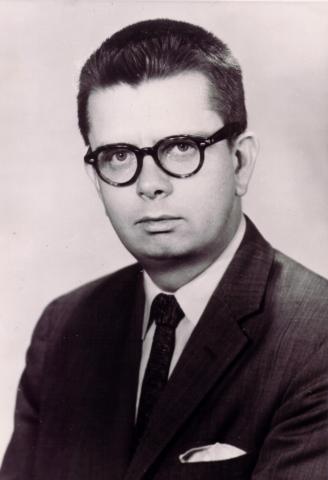 "In the event that my life-work is consulted or remembered after my death, the single point I want emphasized is that everything touching real style in my work -- the shapes of the harmonics themselves, the harmonic rhythm, the oddities of melodic structure, the patterns of statement and return -- is mine and mine alone, and the result of undeviating fidelity to what I consider to be my vocation." -Robert Evett

Robert Evett was born in a small town named Loveland in the Rocky Mountain country of central Colorado in 1922. In nearby Estes Park his father kept a livery stable. His mother played the piano, and it was she who introduced this youngest of her three sons to the art that was to be the center of his life. A frail, precocious child, he was composing music by the time he was attempting to play Bach.

He was in his early teens when he met Artur Schnabel, who was in Colorado on vacation. Evett showed the celebrated pianist a piano sonata he had written and was encouraged to believe he was right in thinking it was his vocation to be a composer.

Shortly after, his brother Kenneth, nine years older than he, and always his most important mentor, brought him to Colorado Springs to live so he could study composition with Roy Harris. Evett went to Cornell as a Telluride Fellow when Roy Harris was composer-in-residence there, and studied under Harris further at Colorado College.

In 1947 he arrived in Washington where he had an interval as Chairman of the Music Department of the Institute of Contemporary Arts and at the D.C. Public Library. In the Fall of 1951 he departed for New York to finish his formal education at Juilliard where he studied with Persichetti. The following year an offer of a position with The New Republic returned him to Washington.