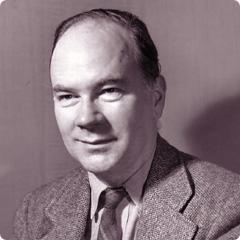 "In American music today there's a terrific amount of differentiation, a variety of styles and approaches. And that's the American story: this enormous, broad thing." - Otto Luening

A noted opera conductor, Otto Luening (b. 1900 - d. 1996) was also a pioneer in the field of electronic music. He was born in Milwaukee and began composing in 1906, moving to Munich with his family in 1912 and later studying at a conservatory and university in Zurich. Luening became an accomplished flautist and played in a local orchestra and opera company there before making his debut as a composer-conductor in 1917. He returned to the United States in 1920 and continued conducting in addition to teaching at various colleges and universities. In the early 1930s he authored an opera of his own, Evangeline. Luening went on to teach at Columbia for many years, also serving the American Academy in Rome as a trustee and, occasionally, as composer-in-residence. He was a member of the American Academy of Arts and Letters and received numerous other cultural awards.

After retiring from Columbia in 1970, he taught briefly at the Juilliard School, and in 1980 he wrote a comprehensive autobiography, The Odyssey of an American Composer. In 1944 Luening became chairman of the music department at Barnard and music director of Columbia's Brander Matthews Theatre; in this capacity he conducted the premieres of Gian Carlo Menotti's The Medium (1946) and Virgil Thomson's The Mother of Us All (1947). In 1949 he was appointed professor of music at Columbia. Under his leadership, the University continued to present many important operatic works, among them the world premiere of Benjamin Britten and W. H. Auden's Paul Bunyan.

Following years of experimentation with electronic, or electroacoustic, music—Fantasy in Space (1952) was an early effort—in 1959 Luening founded the Columbia-Princeton Electronic Music Center, now the Computer Music Center, along with Vladimir Ussachevsky. The center was the first in the United States devoted to the music described by Grove Music Online as that "in which electronic technology . . . is used to access, generate, explore, and configure sound materials," and provided a home for early electroacoustic composers.

From the late 1940s until his retirement, Luening served as Columbia's principal instructor in musical composition; among his students were Marvin David Levy, Charles Dodge, Harvey Sollberger, and John Corigliano. In 1965, with Jack Beeson and then-provost Jacques Barzun, he inaugurated the University's doctoral program in composition. In recognition of his many achievements, Luening received an honorary degree from the University in 1981.